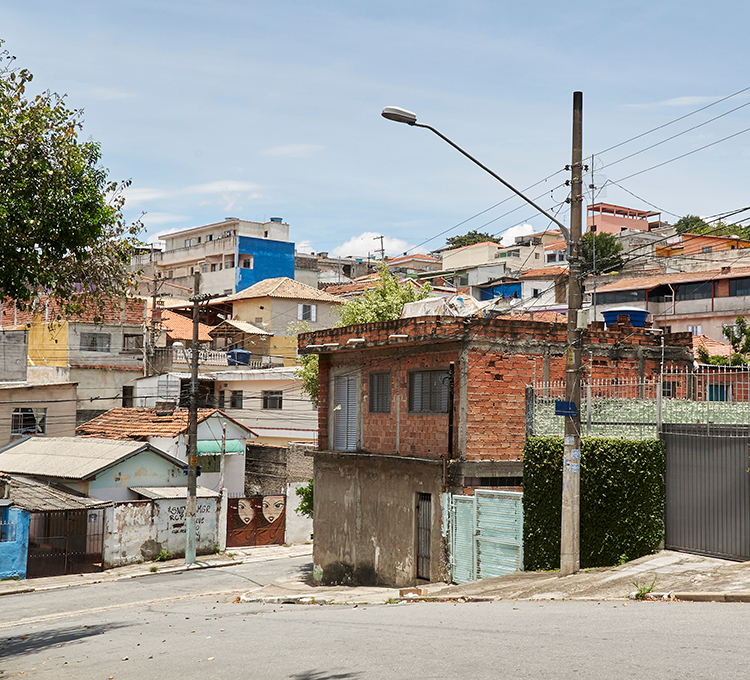 At first glance, it looks like any other shantytown in Brazil: a precarious jumble of tin-roof shacks and shoddy streets.

But look closer, and the community garden, rainwater harvesting system and environmental education program are visible too: this “favela” is remarkably green.

On the outskirts of Sao Paulo, a concrete jungle of 12 million people, the impoverished community of Vila Nova Esperanca (Village of New Hope) is fighting to be a model of sustainable living.

The driving force behind the “green favela” is its leader Lia de Souza, elected a decade ago.

An irrepressible woman of 57, she moved here in 2003 to escape an abusive husband. 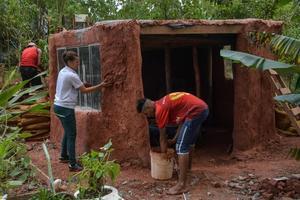 She soon set about turning the favela into the kind of place she wanted to call home: one where people respect the environment and each other, live sustainably and take care of their community together.

She has fought hard to make that a reality, sometimes against abusive police and authorities. 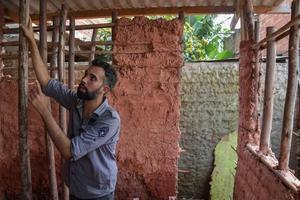 Creating that home has been an ongoing struggle.

But it has earned her the nickname “Lia Esperanca” — “Lia of Hope,” evoking her favela’s optimistic name.

“We have to come together to make this not-so-great place a really great place to live,” she said, giving a tour of the organic garden she helped create.

She proudly pointed out the wealth of plants in the spice section: thyme, basil, turmeric, lavender, three kinds of mint.

Nearby, papaya trees and banana plants sprouted from the red soil, along with vibrant purple bougainvilleas and pink hydrangeas.

“We have all kinds of medicinal plants, too,” said Souza, showing AFP journalists a greenhouse full of seedlings and the compost used for fertilizer, which has the added benefit of reducing waste.

Vila Nova Esperanca sits an hour from the Sao Paulo city center, carved out from the lush forest known as the Mata Atlantica. 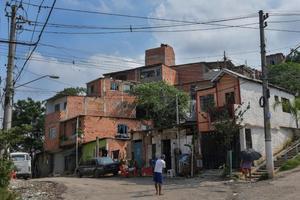 The plants and flowers don’t stop it from looking a lot like the rest of the mega-city’s 1,650 favelas: half-finished shacks line the dirt streets, tattered furniture sits outdoors, stray plastic bags drift in the air.

But the community of 3,000 people has won multiple awards for its environmental programs.

With her bare hands, Souza picked up fist-fulls of mud and slapped them onto the wall of a “brinquedoteca,” a children’s center with educational games and toys that she and the community are building.

The mix of clay and cement they are using “is less expensive than bricks, and it’s sustainable,” she said, her face smeared with mud.

“When I arrived here, there was nothing,” she said — not even electricity. 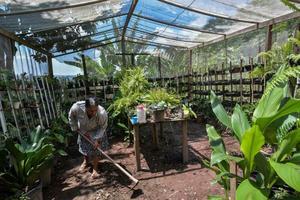 “Today, we have an amphitheater, a library, a communal kitchen, a pond where the children can swim, and the garden, which just keeps growing.”

One of her acolytes, a civil engineer named Rodrigo Calisto, showed off the stone basin where he recently finished building a fish farm with the help of other volunteers. The tilapia will both provide food and eat mosquitoes, a vector for diseases such as dengue fever, he explained.

The community has also erected sandbag walls to protect itself from landslides.

Deadly landslides “are a widespread problem in Brazil, because most favelas are built on hillsides,” said Calisto.

He has also developed a system to collect and reuse rainwater.

“Nature teaches us how to live. You don’t need to go to university,” said Souza.

Souza’s grit has sometimes put her on a collision course with authorities.

Several years after moving to the favela, she learned officials were working to evict its residents, accusing them of building on protected land.

Swallowing her fear, she stood fast with her community the day police arrived, kicking and pepper-spraying residents in a failed attempt to evict them. 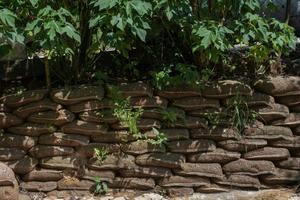 She says the city’s Housing and Urban Development Company (CDHU) has offered her money to leave.

But Souza is determined to stay.

Her latest challenge is the end of a municipal grant of 1,050 reals (about $225) per month to pay residents to work on community projects.

The grant has been a godsend for the favela, where one worker in five is unemployed. But it is about to end.

“People who live on the periphery have nothing. It’s going to be hard if the grant ends,” she said.

“But we’re not going to stop working.”