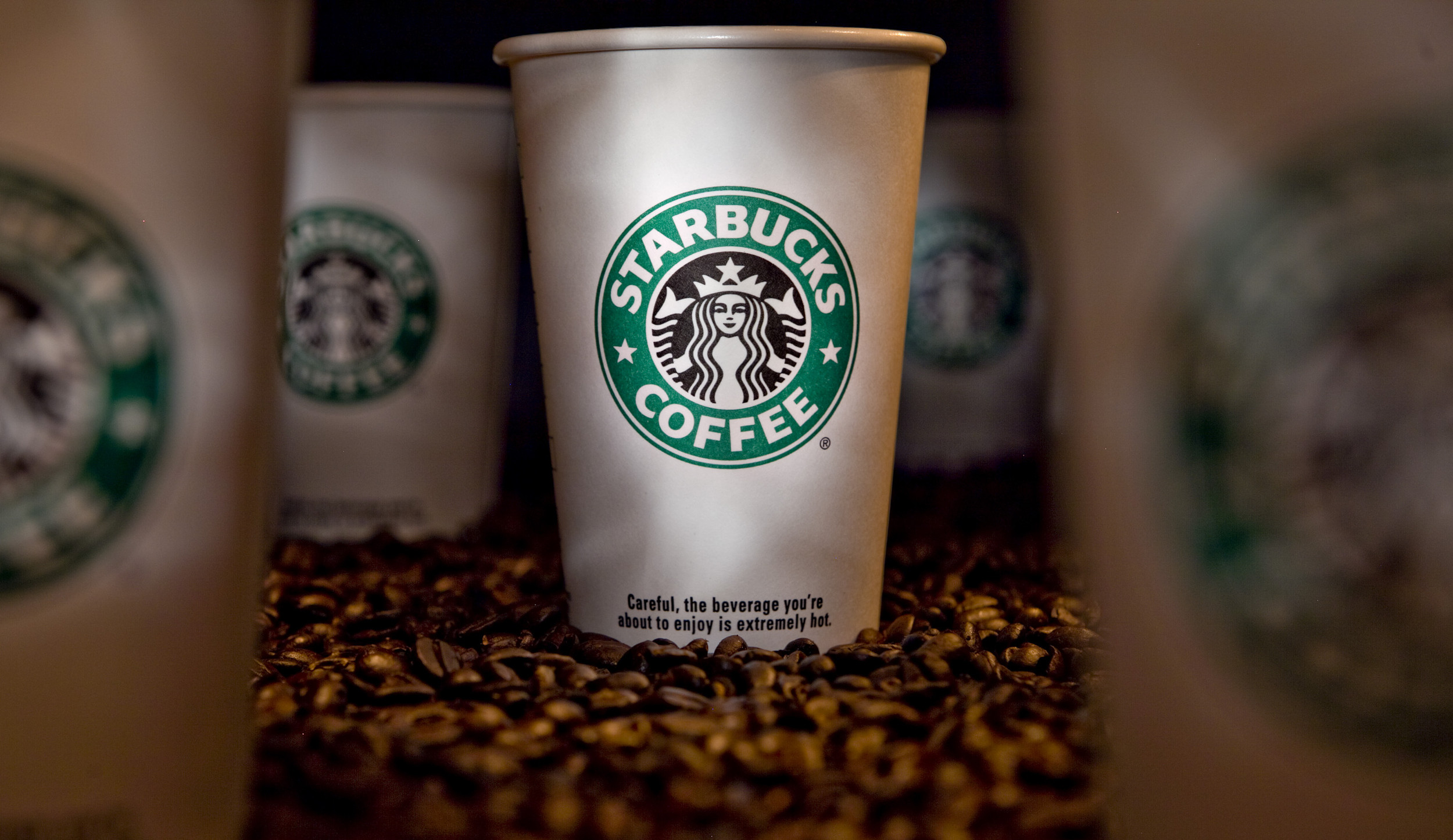 (Bloomberg) — The People’s Republic of Berkeley, Calif., takes pride in its leadership on all things civic and environmental. The small liberal city east of San Francisco was one of the first U.S. cities to adopt curbside recycling. It banned styrofoam and was early to take on plastic shopping bags. Earlier this year, the Berkeley city council put on notice a new environmental scourge: The to-go coffee cup.

Some 40 million disposable cups get tossed in the city each year, according to the city council, almost one per resident per day. So in January, the city said it will require coffee shops to charge an extra 25-cents for customers who use a take-away cup. “Waiting is no longer an option,” Sophie Hahn, the Berkeley city council member who wrote the legislation, said at the time.

Overwhelmed by trash, jurisdictions around the world are banning single-use plastic takeaway containers and cups. Europe says plastic beverage cups have to go by 2021. India wants them out by 2022. Taiwan set a deadline of 2030. Surcharges like Berkeley’s are likely to get more common in an attempt to quickly change consumer behavior before more outright bans.

For chains like Starbucks Corp., which goes through about 6 billion cups a year, this represents no less than an existential dilemma. Dunkin’ recently renamed itself to de-emphasize its donut origins and now makes close to 70 percent of its revenue from coffee drinks. But it’s also a pressing problem for McDonald’s Corp. and the much wider fast-food industry. 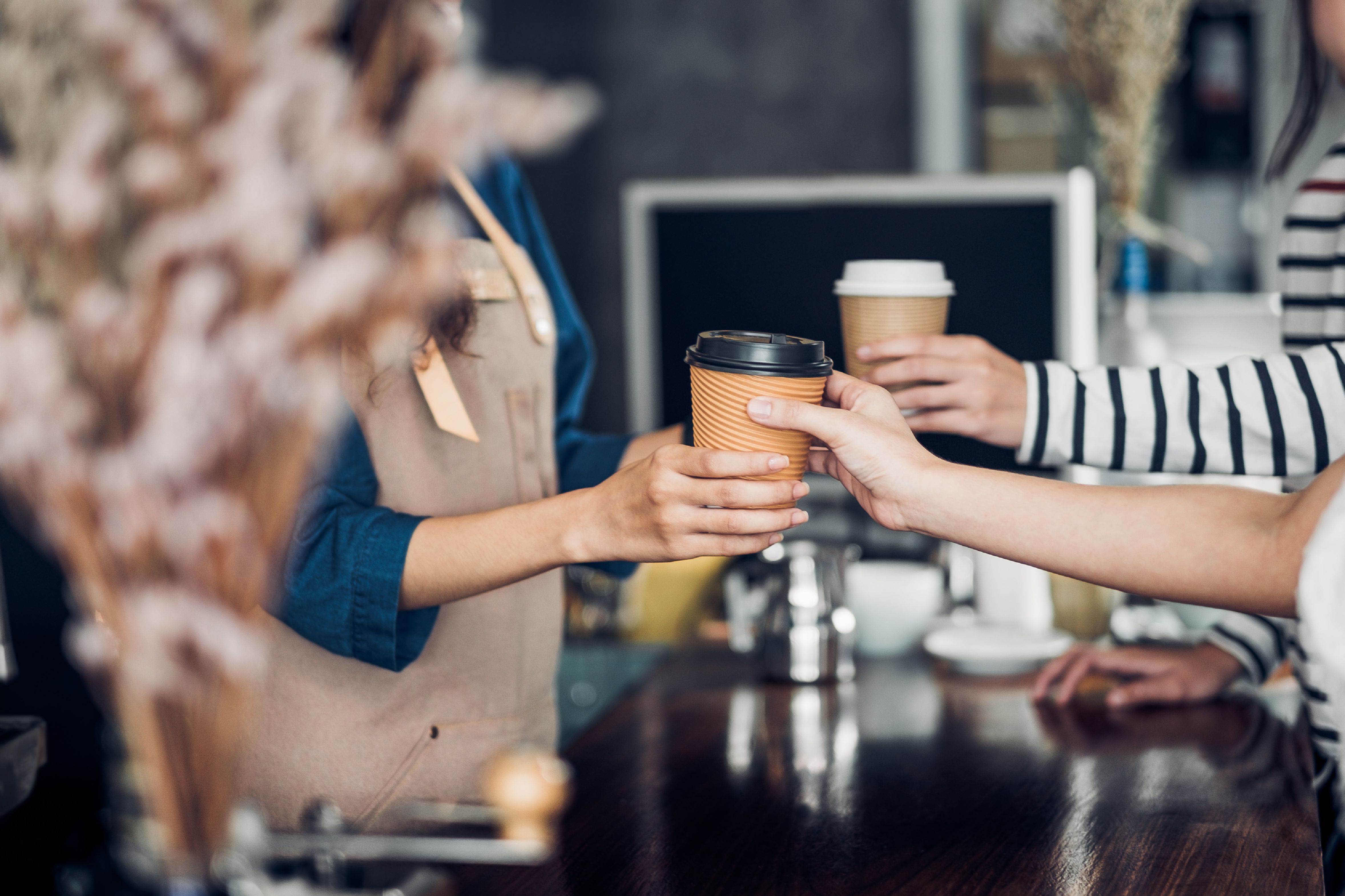 Executives have long suspected this day would come. Separately and together, they’ve been working on a more environmentally friendly alternative to the plastic-lined, double-walled, plastic-lidded paper cup for more than a decade.

It hasn’t gone that well.

“It nags at my soul,” said Scott Murphy, chief operating officer of Dunkin’ Brands Group Inc., which goes through 1 billion coffee cups a year. He’s been working on the chain’s cup redesign since it pledged to stop using foam in 2010. This year, its stores are finally making the transition to paper cups, and they continue to tinker with new materials and designs.

“It’s a little more complicated than people give us credit for,” says Murphy. “That cup is sort of the most intimate interaction with our consumer. It’s a big part of our brand and our heritage.”

Disposable cups are a relatively modern invention. About 100 years ago, public health advocates were eager to ban a different kind of cup—the public drinking vessel, a shared tin or glass cup left near drinking fountains. When Lawrence Luellen patented a wax-lined throwaway cup, he billed it as an innovation in hygiene, a prophylactic measure to counter diseases like pneumonia and tuberculosis.

To-go coffee culture didn’t emerge until much later. McDonald’s rolled out breakfast nationwide in the late 1970s. A little more than a decade later, Starbucks opened its 50th store. Together with Dunkin’, the three now sell close to $20 billion in coffee annually, according to an estimate from BTIG LLC analyst Peter Saleh.

Meanwhile, companies like Georgia-Pacific LLC and International Paper Co. have grown along with the market for disposable cups, which hit  $12 billion in 2016. By 2026, it’s expected to be closer to $20 billion.

The U.S. accounts for about 120 billion paper, plastic and foam coffee cups each year, or about one-fifth of the global total. Almost every last one of them—99.75 percent—ends up as trash, where even paper cups can take more than 20 years to decompose.

A wave of plastic bag bans has inspired the new efforts to curb cup trash. Food and beverage containers are a much bigger problem, sometimes generating 20 times the garbage that plastic bags do in any one locale. But reverting to reusable cloth bags is relatively easy. With to-go coffee cups, there’s no simple alternative. Berkeley is encouraging residents to bring a travel mug—just throw it in your reusable shopping bag!—and both Starbucks and Dunkin’ give discounts to those who do. 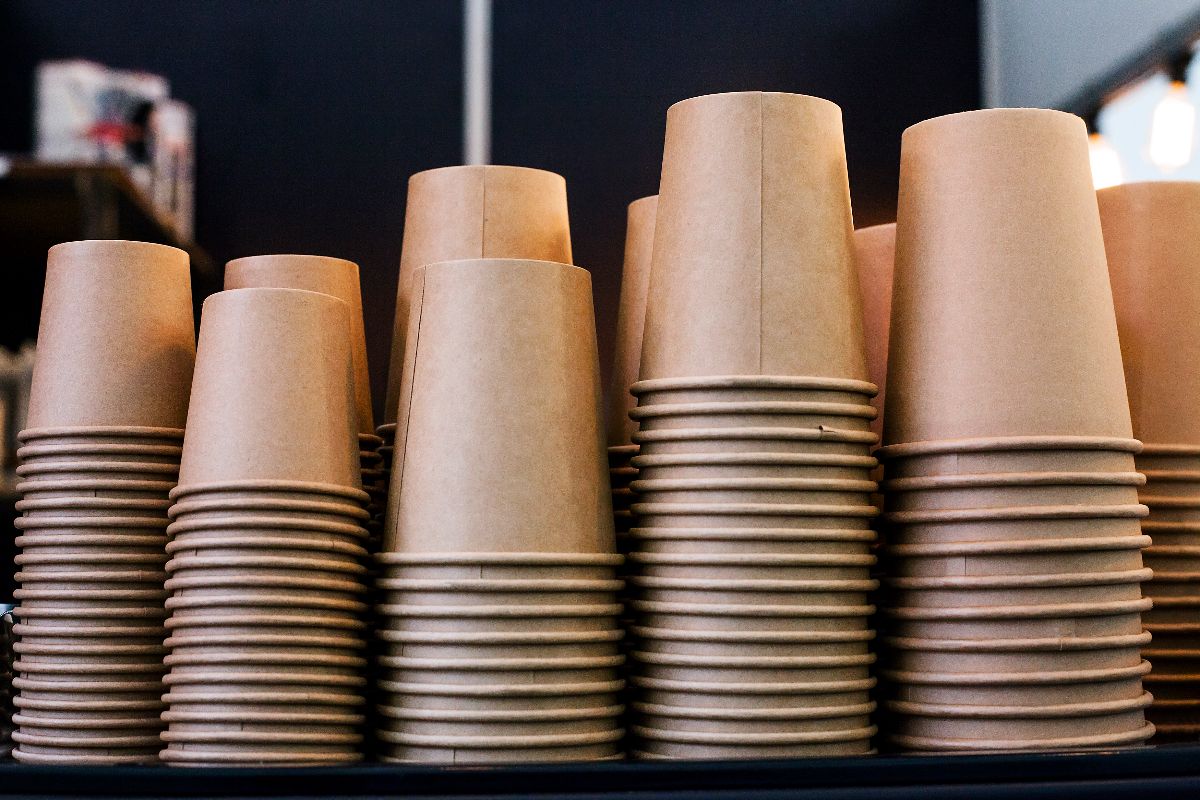 Coffee shops know reusable cups are a good solution, but right now, at franchises they can be sort of an “operational nightmare,” says Dunkin’s Murphy. Servers never know if a cup is dirty or if they should wash it, and it’s hard to know how much to fill a small or medium coffee in a large mug.

A decade ago, Starbucks pledged to serve up to 25 percent of its coffee in personal travel mugs. It has since ratcheted its goals way down. The company gives a discount to anyone who brings their own mug, and still only about 5 percent of customers do. It temporarily added a 5-pence surcharge to disposable cups in the U.K. last year, which it said increased reusable cup use 150 percent.

So companies keep working on a better cup.

It took nine years for Dunkin’ to figure out an alternative to its signature foam cup. An early attempt required new lids, themselves difficult to recycle. Prototypes made out of 100 percent recycled materials buckled and tipped on the bottom. A cup made of mushroom fibers promised to decompose easily, but it was too expensive to scale up at large volumes.

The chain finally settled on a double-walled plastic-lined paper cup, thick enough to protect sippers’ hands without an external sleeve and compatible with existing lids. They’re made from ethically sourced paper and biodegrade faster than foam, but that’s about it—they’re more expensive to make and aren’t recyclable most places.

Paper cups are notoriously difficult to recycle. Recyclers worry the plastic linings will gum up their machines, so they nearly always send them to trash. ​​​​​​There are only three “batch pulper” machines in North America that are capable of separating plastic lining from paper.

If cities can improve recycling on a mass scale, about one in 25 coffee cups could be recycled in just a few years, up from 1 in 400, according to the U.K.’s Paper Cup Recovery & Recycling Group. That’s a big “if.”  Consumers usually toss their coffee cups attached to their plastic lids, which then have to be separated before they can be recycled, separately(2).Dunkin’ says it’s working with municipalities to make sure that cups that can be recycled actually will be. “It’s a journey—I don’t think it will ever be over,” says Dunkin’s Murphy. McDonald’s Corp. recently teamed with Starbucks and other quick-serve restaurants to back the $10 million NextGen Cup Challenge—a “moon shot” to develop, accelerate and scale a more sustainable to-go cup. In February, the contest announced 12 winners, including cups made of compostable and recyclable paperboard; the development of a plant-based lining that could keep liquid in; and schemes aimed at encouraging reusable cup use. 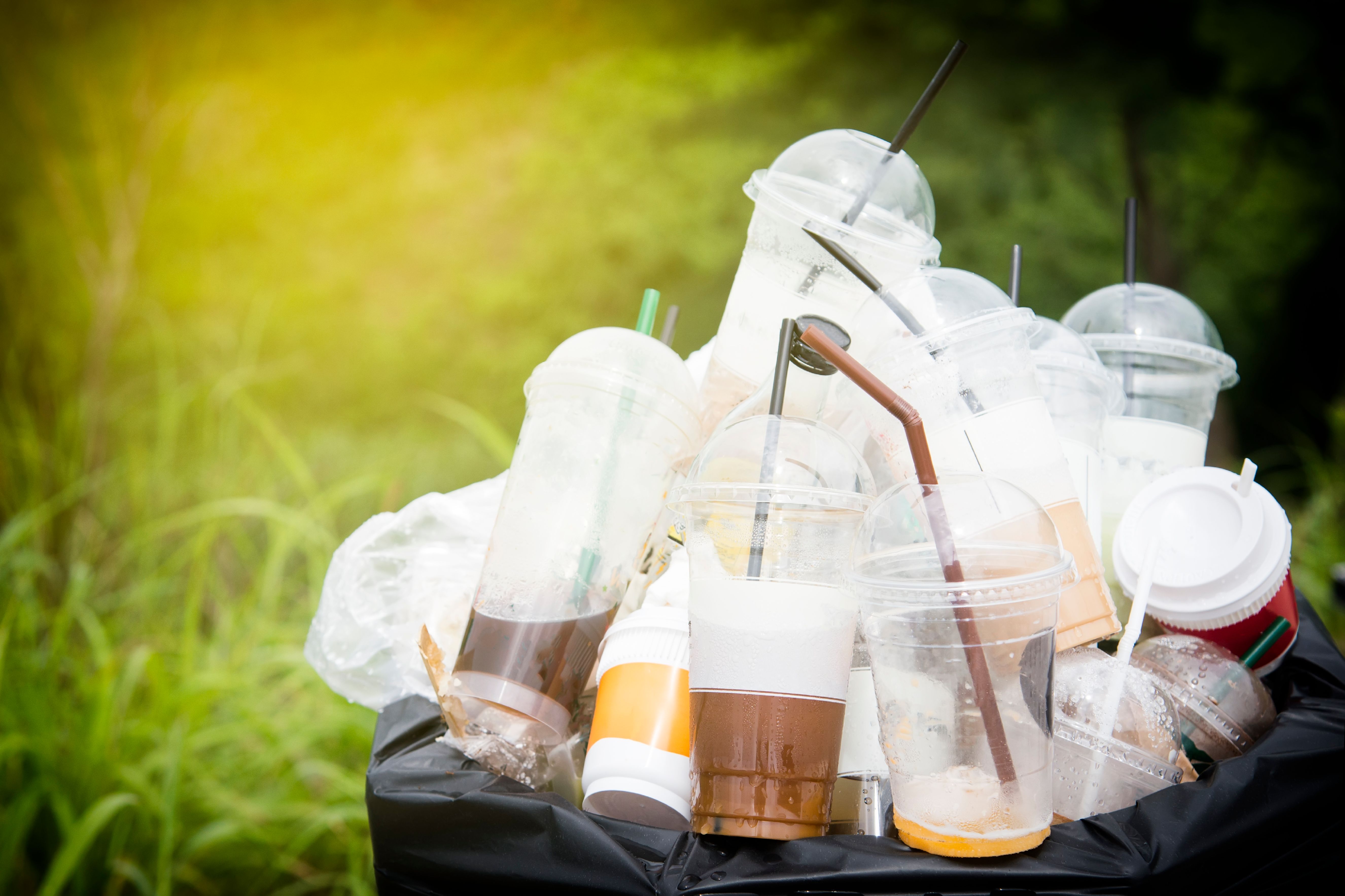 “We’re looking for solutions that are near-term commercially viable and things that are aspirational,” said Bridget Croke, vice president of external affairs at Closed Loop Partners, a recycling-focused investment firm which is managing the challenge.

A cup that can degrade more quickly would be one solution—Europe’s ban makes an exception for compostable cups that disintegrate in 12 weeks—but even if such a cup were readily available and cost-effective, the U.S. doesn’t have enough of the industrial composting facilities needed to break them down. In that case, they head to the landfills, where they won’t decompose at all(1).

At its annual meeting in 2018, Starbucks quietly tested a coffee cup made from the recycled parts of other coffee cups, widely considered the coffee cup’s holy grail. It was an act of performance art as much as anything else: In order to engineer the limited run, the coffee chain collected truckloads of cups and sent them for processing to a Sustana batch pulper in Wisconsin. From there, the fibers traveled to a WestRock Co. paper mill in Texas to be turned into cups, which were printed with logos by yet another company.Even if the ensuing cup was better for the environment, the process used to make it certainly wasn’t. “There is a big engineering challenge here,” said Closed Loop’s Croke. “It’s been clear the solutions companies have been working on to solve this issue really haven’t been fast enough.”

So governments, like Berkeley’s, aren’t waiting. The municipality surveyed residents before it imposed the charge and found it would convince more than 70 percent to start bringing their own cups with the 25-cent surcharge, said Miriam Gordon, program director at nonprofit group Upstream, which helped Berkeley write its legislation.The charge is meant to be an experiment in human behavior, rather than a traditional tax. Berkeley’s coffee shops keep the extra fees and can even lower their prices so that what the consumer pays stays the same. They just have to be clear that there is a surcharge. “It has to be visible to the customer,” Gordon said. “That’s what motivates people to change behavior.”

(1) This all got a lot worse in 2018 when China decided it had enough of its own trash to worry about and stopped processing the “contaminated” — mixed material — trash from other countries.

(2) Compostables need the free flow of air to break down. Because landfills are sealed to prevent leakage, even a cup designed to break down quickly doesn’t get the air circulation it needs to do so.

–With assistance from Leslie Patton.

To contact the editor responsible for this story: Janet Paskin at jpaskin@bloomberg.net

This article was written by Emily Chasan and Hema Parmar from Bloomberg and was legally licensed through the NewsCred publisher network. Please direct all licensing questions to legal@newscred.com.