The World Is Headed for a Food Security Crisis. Here’s How We Can Avert It

The world currently produces more than enough food to feed everyone, yet 815 million people (roughly 11% of the global population) went hungry in 2016, according to the U.N.

By 2050, with the global population expected to reach 9.8 billion, our food supplies will be under far greater stress. Demand will be 60% higher than it is today, but climate change, urbanization, and soil degradation will have shrunk the availability of arable land, according to the World Economic Forum. Add water shortages, pollution, and worsening inequality into the mix and the implications are stark.

Among those trying to mitigate the risk of collapse is Richard Deverell, director of Britain’s Royal Botanic Gardens at Kew. The gardens, which house “the largest and most diverse botanical and mycological collections in the world” are a key resource for scientists studying a multitude of food security issues: from wild rice varieties that require less water than their domestic counterpart to the proclivity of enset, a banana-like plant that has helped stave off famine in some regions of Ethiopia. The gardens also host the Millennium Seed Bank, which Deverell describes as an “insurance policy” against the extinction of plants in the wild.

TIME recently caught up with Deverell at the British Government-backed GREAT Festival of Innovation in Hong Kong to discuss ways to avert a global crisis.

What is global food security and why should we be concerned about it?

Food security is a really serious issue facing all of humanity. In essence, it’s about how we feed a growing population at a time of climate change, which is unpredictable and not fully understood. Globally, we are reliant on a very slender thread of genetic diversity. According to the U.N.’s Food and Agriculture Organization (FAO), more than 50% of all human calories come from just three plants: rice, maize, and wheat.

How vulnerable are our food sources to climate change or disease?

Over thousands of years of agriculture, humans have selected plants for particular characteristics, typically their yield. High yield is important for feeding a growing population but it means that our food crops are very homogenous. Currently, only 12 crops account for 75% of all human calories. If a particular pest or pathogen arises, or a particular vulnerability to changing climates, the entire crop becomes vulnerable because of the lack of genetic variability within it. We’ve seen this happen before. In the 1950s, the global banana supply was largely based on a single variety called the Gros Michel. The Panama Virus wiped it out because there was a lack of variability within the crop. But I’m confident there are solutions if we make the right decisions now. There are about 5,500 different varieties of edible plants, and yet we have found ourselves concentrating on a very narrow selection. Another factor is the balance of vegetable-based diets versus meat-based diets.

Why are meat-rich diets such a big problem?

One of the greatest causes of biodiversity loss and therefore extinction is the conversion of forest and woodland into grazing for cattle. A kilogram of beef is about 30-times more demanding on the environment than a kilogram of plant protein. For a sustainable future, I suspect that quite radical change to our diets is needed. One of the pressures is that developing societies are shifting to a meat-based diet. If the populations of India or China were to adopt the same meat-rich diet as America that would be extremely demanding on global resources. 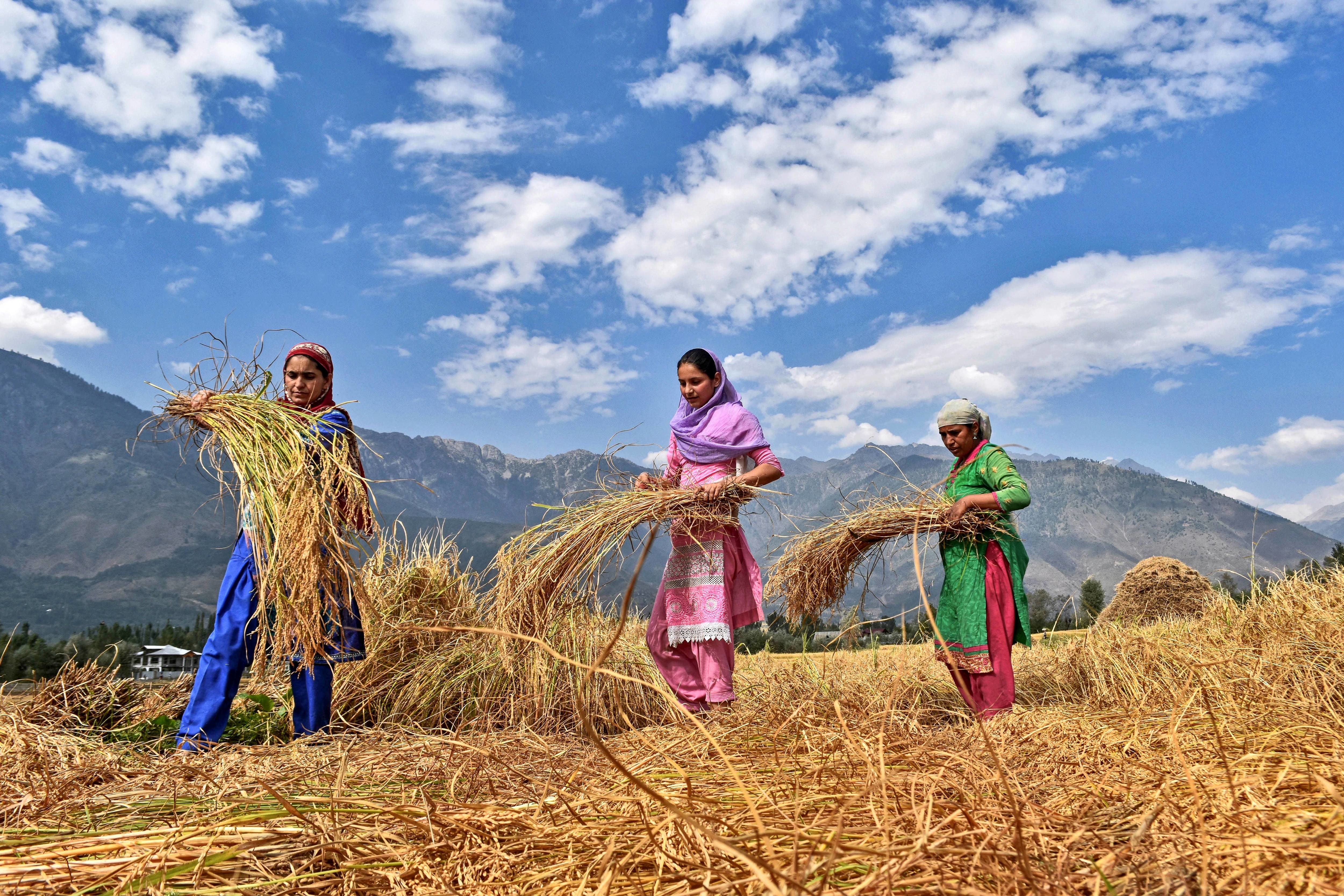 Women in a paddy field during rice harvesting season in Srinagar,Indian administered Kashmir on Sept. 24, 2017.

Many Americans see meat as an integral part of every meal. How can this change?

The campaign should start with consumers being made aware of what they’re eating and the consequences of that. Do people understand that eating beef is significantly more demanding on the environment than eating pork or chicken? Do people know where their food is coming from? But we are already seeing an uptick in interest in vegan and vegetarian diets — or perhaps eating vegetarian meals three or five times per week. I was in San Francisco last autumn and I was surprised to see the number of posters up urging a vegan diet — in 20 years time, will eating meat in San Francisco be as socially unacceptable as drinking and driving is now?

“Meatless meats” are gaining traction but there’s also resistance to the idea of eating food grown in test tubes. Is this the future?

There will always be resistance to new technologies. But it’s interesting because they are marketing plant-based burgers not to vegans or vegetarians, but to people who enjoy a beef burger. They are basically saying: try this, this tastes just as good, it’s healthier for you, it’s less expensive and it’s certainly a lot better for the environment. Genetic modification (GM) is another issue where a poor public understanding of the underlying technology has led to an understandable concern. It’s often alleged that GM is not natural. Well, orthodox agriculture is not natural, it’s extremely damaging to the environment and if GM crops can be produced that require less herbicide, or pesticide, or water, then I think we as a society have to understand that there are some benefits involved.

Read more: A Turning Point for Hunger in America

What do you think will be on our dinner plates in 20 years time?

I would hope there would be a greater diversity of food sources; they would be more seasonal, and perhaps locally sourced. I think we’ll still be eating meat but perhaps it will be seen as more of a treat, something that’s special. Our diet evolves all the time: 30 years ago an avocado was a very rare and exotic thing in Britain, and bananas only appeared after the Second World War.

What can Americans do now to eat more sustainably?

Eat smaller portions. Eat less meat, perhaps fewer times per week. And try to reduce the miles that your food has had to travel. Locally sourced, seasonal food is good for your health and good for the environment. People might also think of growing their own food on a balcony, a roof, or in a garden. Not only is it really enjoyable, but it also reconnects individuals with nature.

This article was written by Joseph Hincks / Hong Kong from TIME and was legally licensed through the NewsCred publisher network. Please direct all licensing questions to legal@newscred.com.