The Kyowa Kirin Fuji Business Office hosted a science experiment program called the Bio Adventure Hands-on Experience Session on August 9. This program is held every year when schools are out for summer break in Japan. Aimed at junior high school students from the nearby area, the program organizes experiments for children to experience drug research and development(R&D) or production floor work. This year, 27 first or second year junior high school students participated along with some 15 guardians. This article reports on what happened throughout the day.

We received more applications from local junior high students than what our class could hold.

Bio Adventure is a science experiment program that Kyowa Kirin has continually held at research laboratories and plants within Japan for more than 20 years. With an aim of contributing to develop the next generation of scientists, we organized different programs for each age group; from elementary school students to high school students. These programs also help open communication with the wider community regarding the Kyowa Kirin Group’s businesses and strengths.

This program was designed for first or second year junior high school students. After speaking to junior high schools in Nagaizumi where the Fuji Business Office is located, we received more applications than what our class could hold. 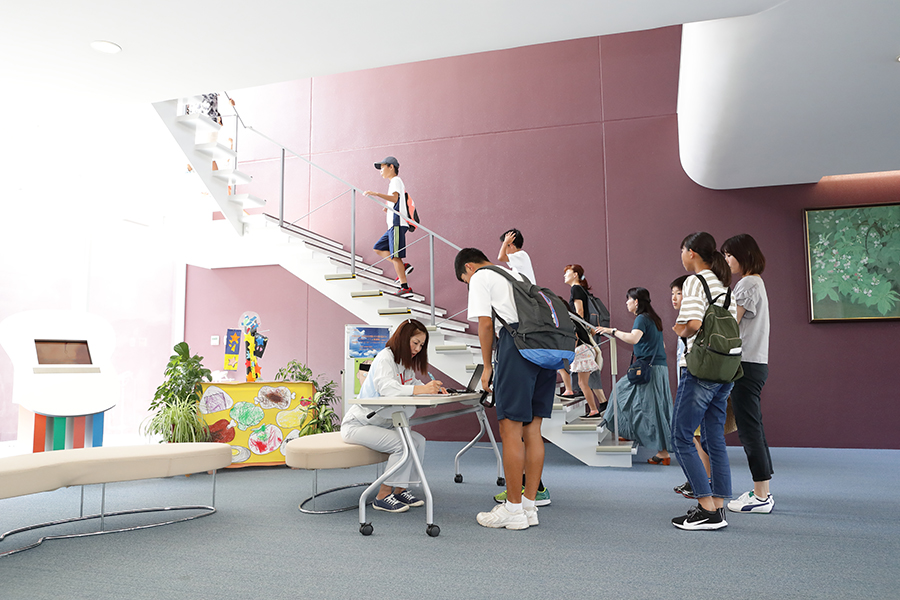 Heading to the venue after checking in at the reception area. 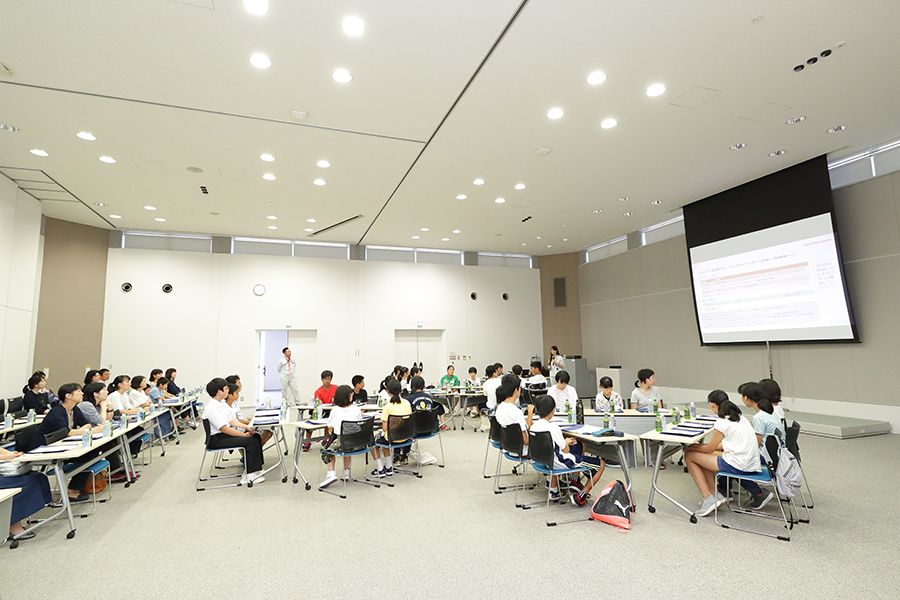 Students’ guardians observed them from the back of the room.

All participants arrived at a steady pace despite the intense heat and were divided into three teams for the program. The students looked slightly nervous as they listened to our drug discovery researchers at the front of the room describing the day’s schedule. 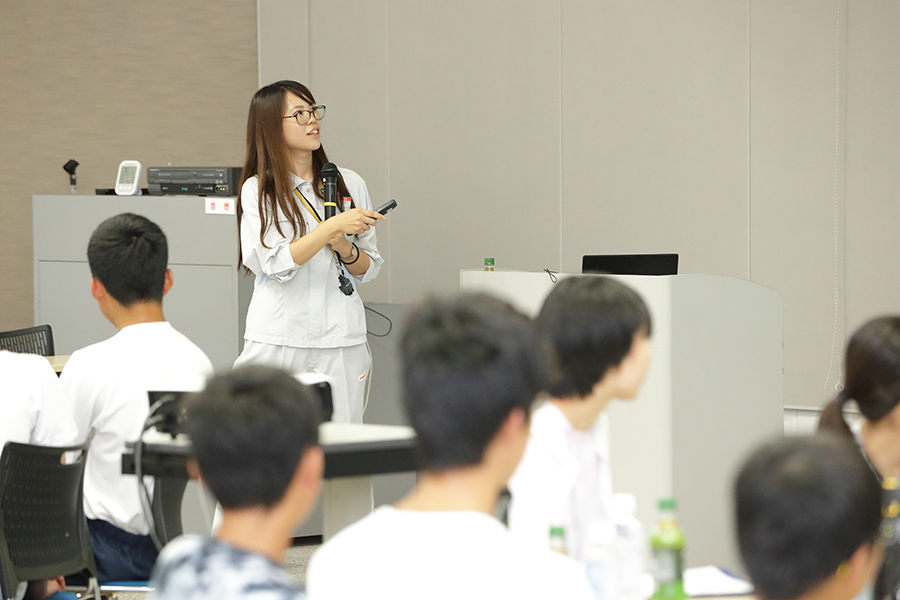 The program was conducted by researchers that work with medicine research daily.

“At this site, many researchers with a wide variety of roles all put their minds together to create drugs. Some produce drug candidates, some look at the effects of these drugs on cells, some check their safety, and there are even people who think about the shape and form of each medicine. Today, we are all going to work as researchers and experience what it is like to produce medicine!”

After breaking the ice with a game involving self-introductions, each team took turns participating in three activities: crystallizing taurine, producing tablets and touring the laboratory. 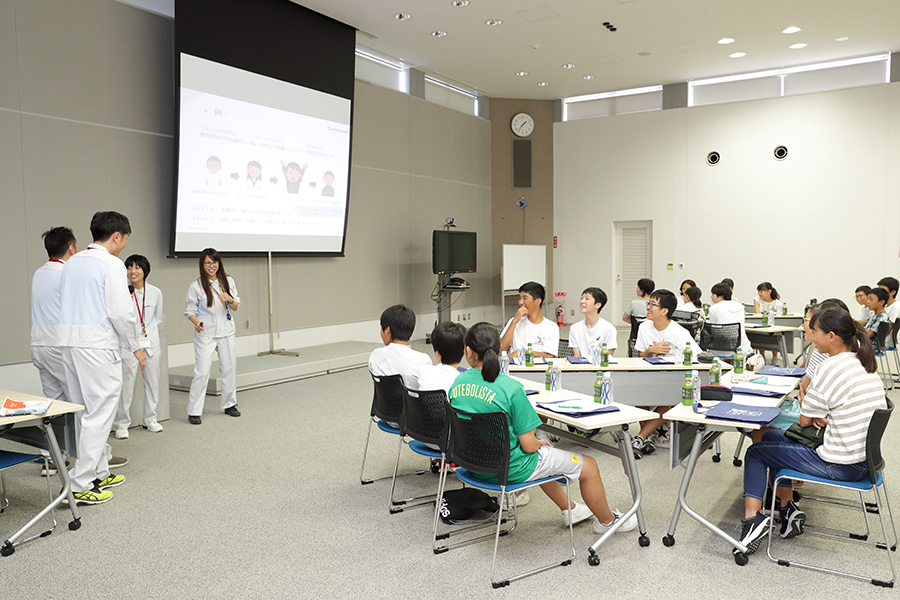 A picture from the self-introduction game. The dialog between the researchers ushered laughter among participants.

Thinking about the recipe for making medicine:
Experiment for crystallizing the small-molecule compound taurine

Participants first put on their white coats and goggles before starting the taurine crystallization experiment. Taurine is a type of amino acid. One of our researchers asked the students if they knew about the compound, seeing as it is also included in energy drinks. Some students mentioned that they had heard of it from TV commercials. 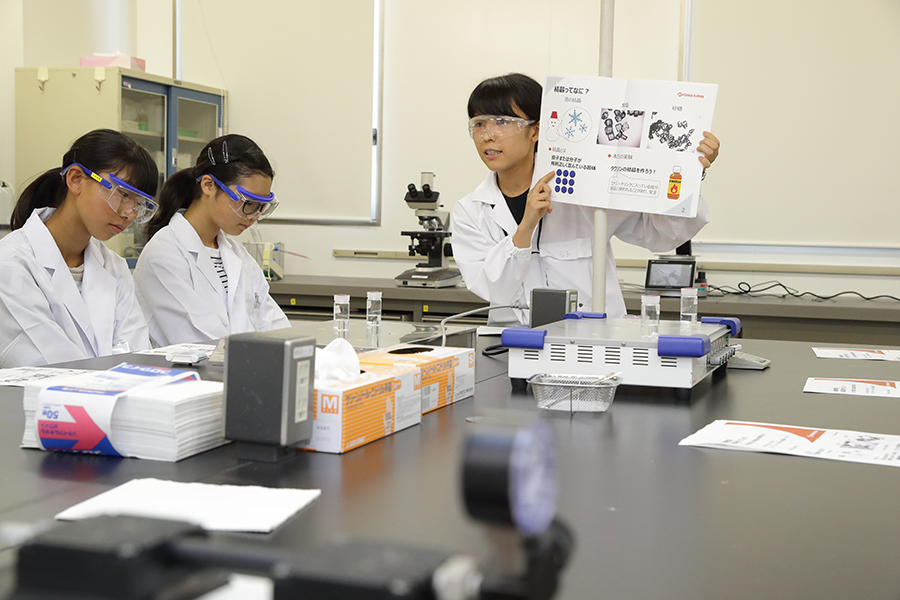 Our researcher described the nature of crystals to the students.

This experiment started with placing a container with a saturated solution of taurine onto a stirrer, adding ethanol, and then leaving the mixture to stand for a while. The students found that the aqueous solution began to turn a cloudy white color over time. The addition of ethanol had forced the dissolved taurine to come out of the water solution. The students then passed the liquid through an electric filter to suck away all moisture, leaving only taurine crystals. Finally, they observed these crystals under a microscope. 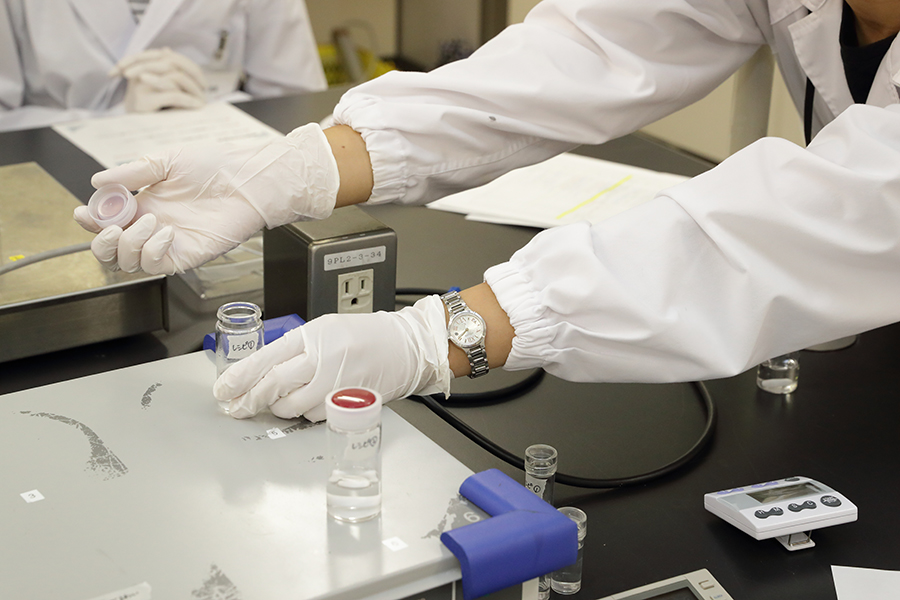 Participants used saturated solutions prepared by the researchers and added ethanol to the containers.

After describing the steps of the experiment, our researcher asked the students the following question:

“What do you think will happen to the crystals if you change the volume of ethanol? Let’s try making two different types of crystals in today’s program!”

One container has 1 ml of ethanol added to it and the other has 5 ml.
The aqueous solution with 5 ml of ethanol developed a cloudy white color more rapidly.

The researcher prepared another batch of saturated solution and placed it beside the containers with 1 ml of added ethanol. This time, the students added 5 ml of ethanol to the new containers and noticed that the solutions became clouded quicker than the first time. When looking under the microscope, these new crystals had a longer and thinner shape. The students commented on the differences in shape as they looked into their microscopes. 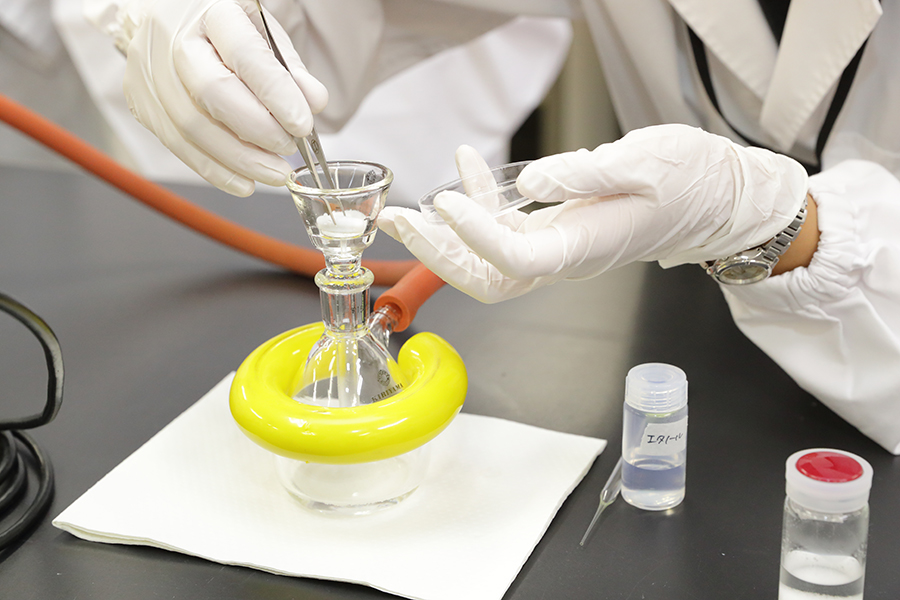 The electric filter sucks away moisture, leaving the crystals behind. 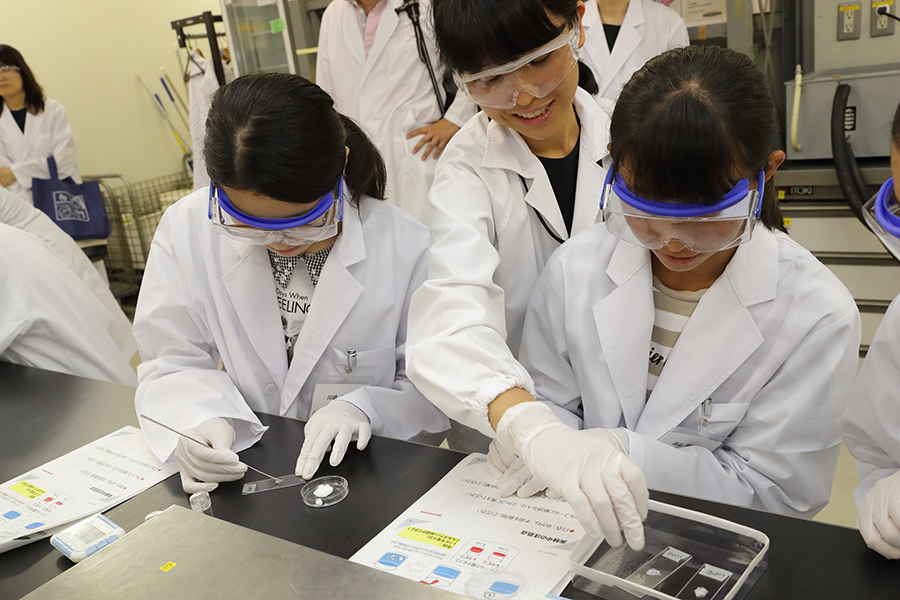 Placing the crystals onto a microscope slide.

“The arrangement of the molecules changes depending on the recipe. This leads to the differences in shape and affects how easily the crystals will break. The active ingredients that work to heal illnesses are included within tablets in the form of crystals. If the active ingredients easily become deformed or denatured, you encounter a problem where the drug does not last for a long time. Therefore, it is our job to seek a recipe for making crystals that do not break easily.”

Many of the participants had looked at salt or alum crystals in experiments that they had performed in their junior high school classes. In this way, the Bio Adventure program helped the students gain a deeper understanding about crystals. One student raised the following question:

The researcher answered that the active ingredients have the same molecular structures, but that each type of drug has different other components. The students observed the differences between drugs that dissolve in the mouth and in the stomach in more detail at the next activity: producing tablets.

Thinking about the form of medicine:
Experiencing tablet production and observing ODTs

Next, students went to experience how tablets are produced. Tablets are formed by taking a powder with the active ingredients mixed in and using a tool to press this powder into the shape of a tablet. This is also known as the compression step within the process of producing tablets. In real-life production facilities, this work is all automated using machinery. 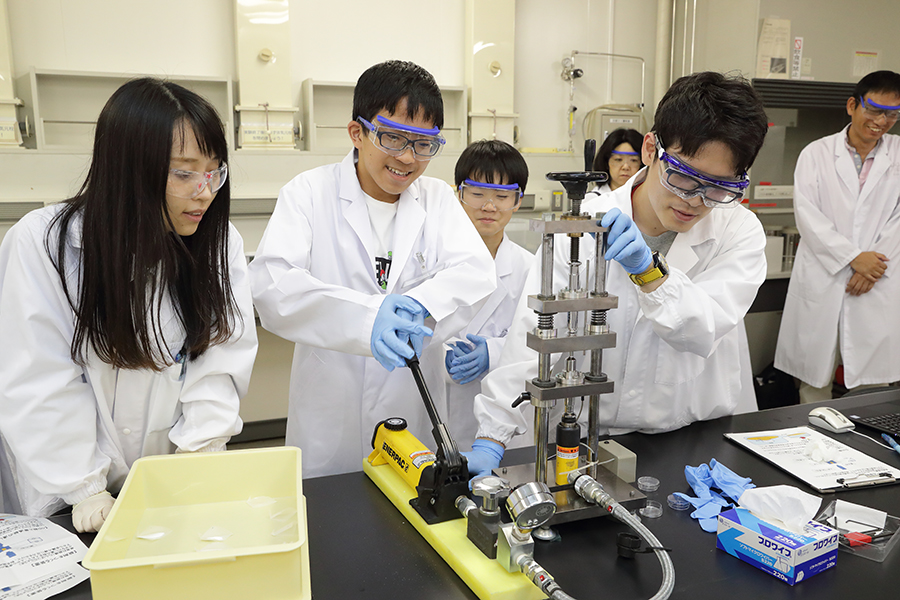 The students put powder into the tool and applied pressure from above and below.

Participants split up into groups to make regular tablets and ODTs (orally disintegrating tablets). ODTs are designed to dissolve in a small amount of water. They dissolve very quickly when you put them in your mouth and have gained popularity over the last few years as they are easier to take for people who have difficulty swallowing tablets.

“Let’s compare the speed at which regular tablets and ODTs dissolve. Look at the colored liquid in the dish. What will happen if we put both tablets in the liquid at once?” 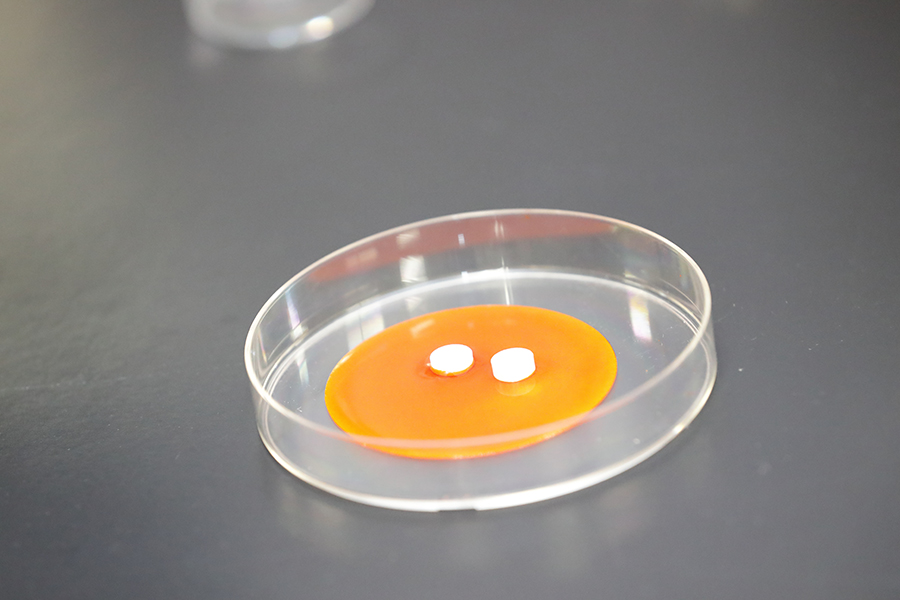 One regular tablet and one ODT are placed in the dish at the same time.

The ODT allowed moisture to go through it at a steady pace, making the liquid around it turn pink. This tablet is designed with a high rate of water penetration, meaning that it disintegrates quickly in just a small amount of water. The students looked intently at the tablets dispersing at different speeds.

Researchers must use their ingenuity when designing the form of tablets so that patients can take them easily. Through this experience, the students learned about the many different types of tablets. 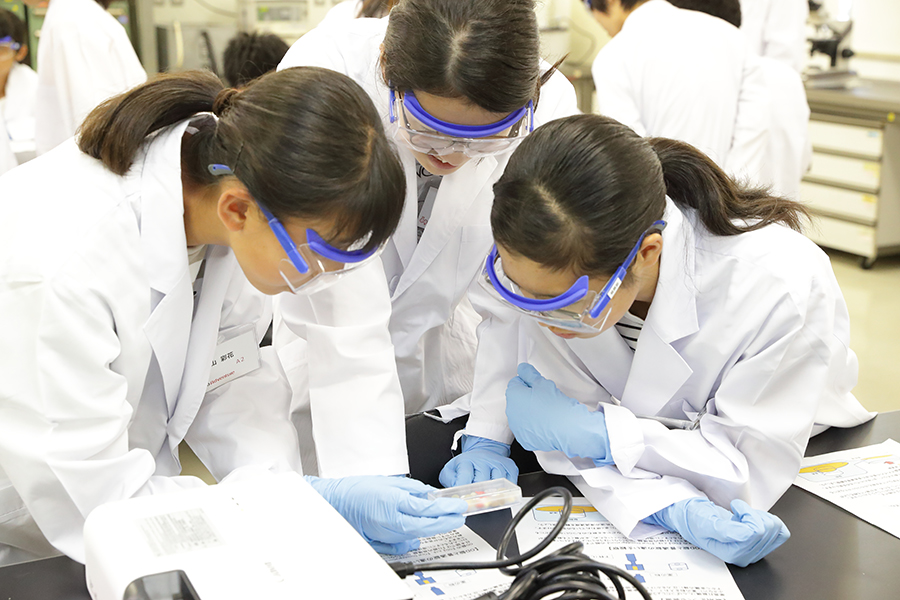 The students look at a case with samples of many kinds of tablets, each with a different color and shape.

Looking at where medicines are born:
Laboratory tour

Finally, the students went on a tour inside the laboratory. 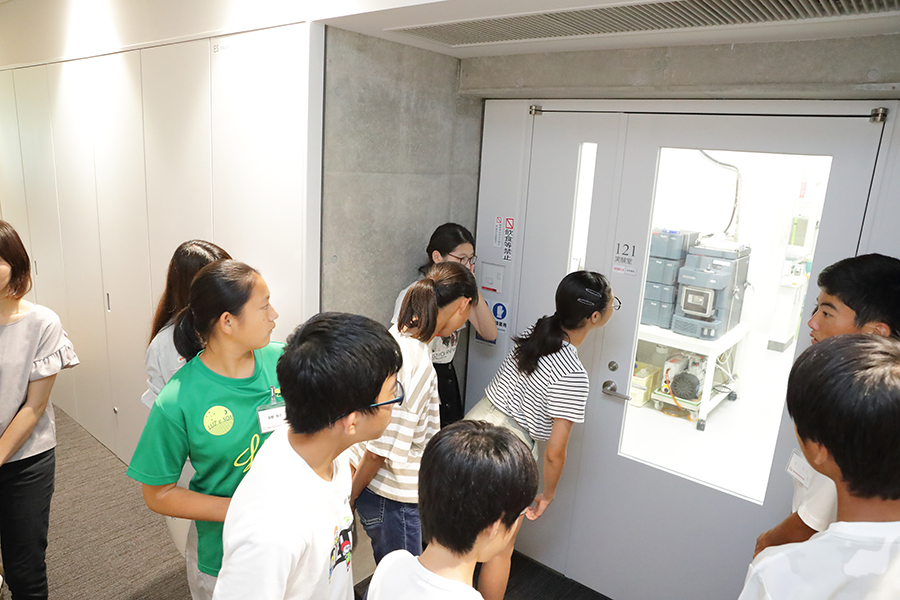 The students saw many kinds of machinery at the experimental lab, such as a machine for weighing molecules, and another for evaporating organic solvents. 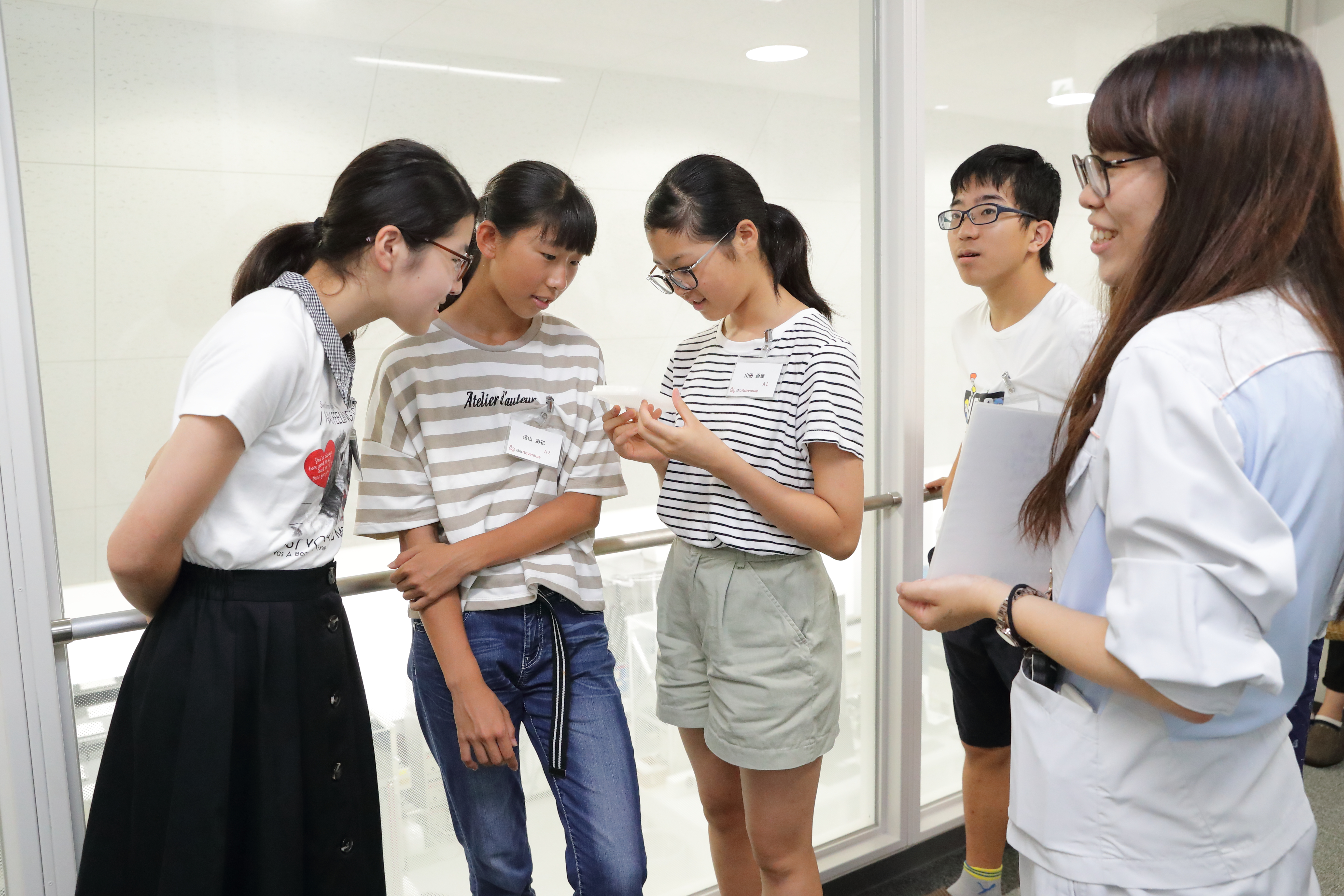 Students picked up plates used for experiments in the room for observing the effects of medicines. The plate has a total of 384 holes. Each hole is filled with cancer cells along with a drug candidate in order to verify if these candidates work. 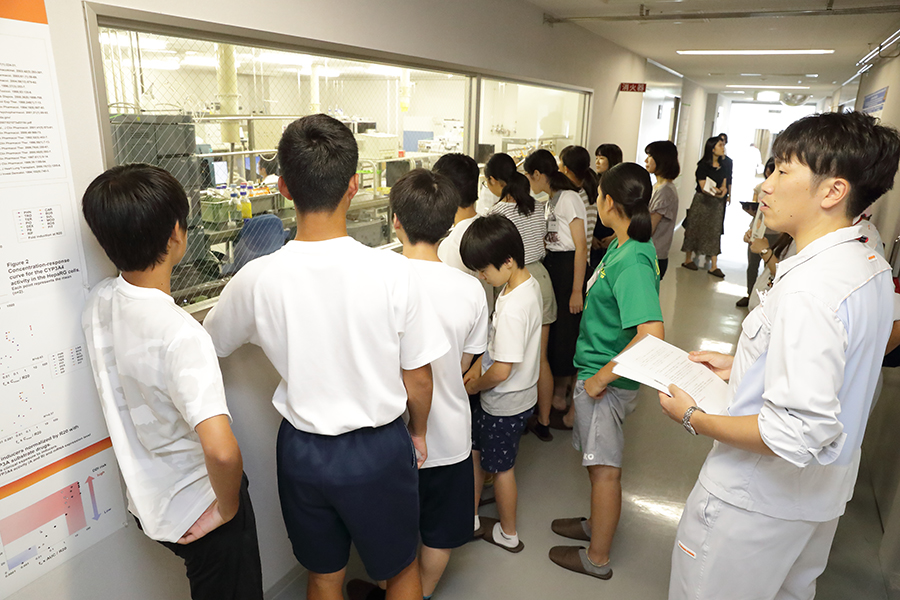 Next, the students visited a room for checking the safety of drugs. People conduct experiments to check what medicines do inside the body after administration. Researchers can find out where a drug is exerting its effects by looking at a person’s urine and blood samples.

All the researchers involved in running the program volunteered on their own, and they worked preparing for the program alongside their daily tasks. Each researcher had different reasons for volunteering. Some had an interest in teaching science. Others mentioned that they received support from companies for research funding at university and wanted to contribute to the next generation. The program turned out to be a good opportunity for all researchers involved.

Continuing to run programs that contribute to the local area

At the end of the program, the students talked about their experience.

“I visited to a drug store as part of a work study program, and this got me interested in medicine, so I applied for this program as well. I liked the experiment with crystals.”

“My dad works here. I came to the laboratory fair before, but this is the first time for me to come inside the building. I was surprised to know that some of the machinery can cost as much as 100 million yen.”

Aoi Higuchi oversees the program. He offered the following remarks:

“There are not many opportunities for local people to come into our laboratories, but I could see that everyone has a strong interest in this area based on the large number of applications for this program. Going forward, I would like to contribute to the local community with programs like this where people can experience the R&D process in drug discovery.”