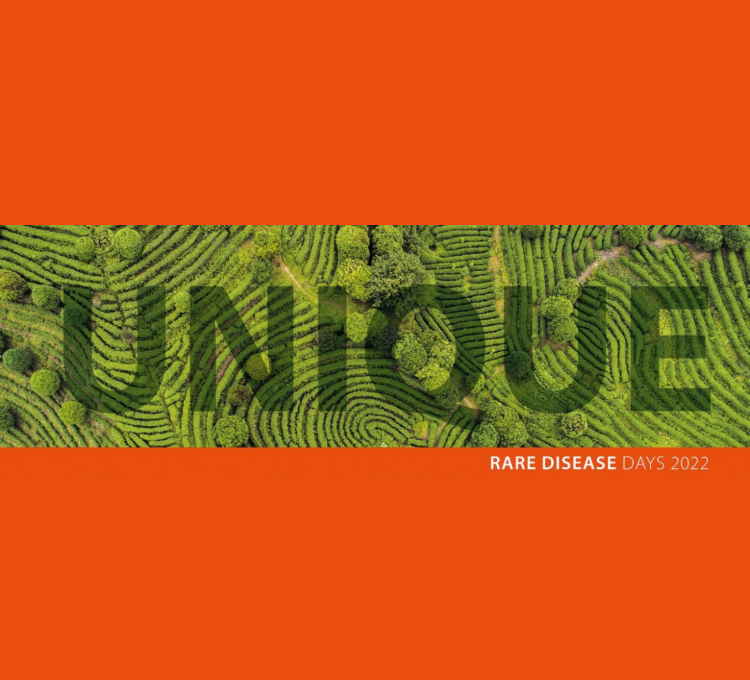 Image: The key visual of the internal Rare Disease Month campaign at the DACH cluster.

“Unique” was the theme of the campaign. (partially modified from the key visual used by the company)

Begun in Sweden in 2008, Rare Disease*1 Day (RDD) is observed on the final day of February every year—on the 28th, or 29th in leap years—to coincide with the “rarest day” of the year. The goal of this day is to work towards improving the quality of life of people living with rare diseases through better diagnosis and therapy, and there are many different initiatives run in tandem with it each year.

RDD calls for greater support from the patient’s perspective so that no one with a rare disease is left behind, and can be seen as a day that embodies PA and Kyowa Kirin’s philosophy.  This is why each year in the period surrounding RDD, Kyowa Kirin works to raise awareness in each global region and calls for understanding and support, both within the company and amongst the general public. So what kind of activities were held in Europe, the Middle East and Africa?

*2 The concept of promoting correct understanding of disease and creating better therapies and living conditions through active dialogue and cooperation between patients, doctors and pharmaceutical companies. 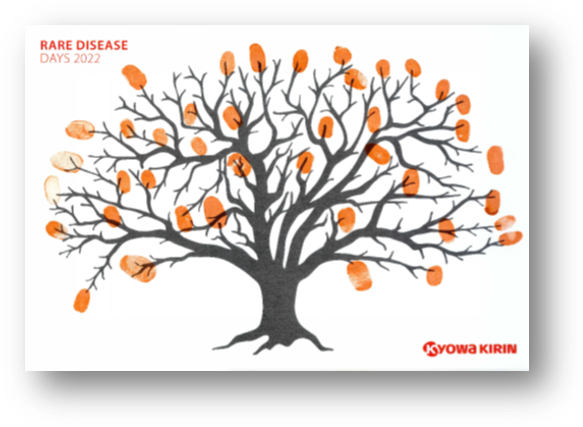 Image: The “tree of fingerprints” that employees created together

At Kyowa Kirin subsidiary Kyowa Kirin International, the DACH Cluster (Germany, Austria and Switzerland) ran an internal campaign under the slogan “People living with a rare disease are also unique.” They say, “The overarching idea/goal of the campaign has been de-stigmatization: Every one of us is unique, and everyone is special in his/her own way. Life in itself is unique. Hence, people living with a rare condition should not feel singled out or stigmatized or different from other people.”

One of the most notable activities from the campaign was the unique “tree of fingerprints.” For this project, employees hung up a poster of the trunk and branches of a tree at the DACH headquarters. Colleagues then had the opportunity to join in giving the tree foliage by using an orange ink pad to create a leaf with their fingerprint.

The process of leaves gradually growing in number across the tree was recorded and made into a video, and when the tree was complete, a picture was taken and turned into a postcard that was given to employees. They chose to use a tree for the activity to symbolize strength and honor, and the collective uniqueness of each employee was united to complete the illustration and serve as a sign of solidarity with patients of rare diseases. The idea behind the project was popular with employees, and many still have the postcard decorating their desks. 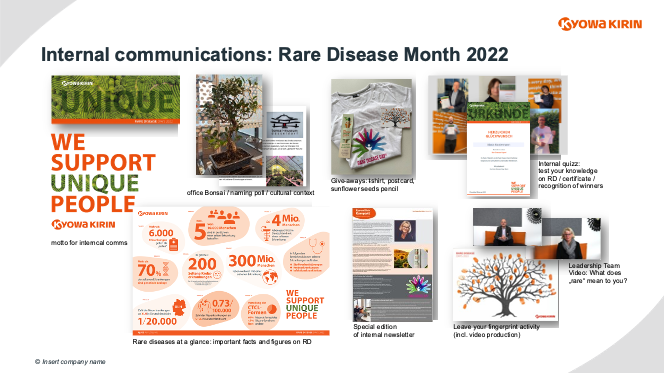 Image: The campaign was rolled out multi-medially over four weeks. It included an internal newsletter, videos with the leadership team, a rare disease quiz, an infographic, etc.

Promoting RDD in the newspaper with an advertorial 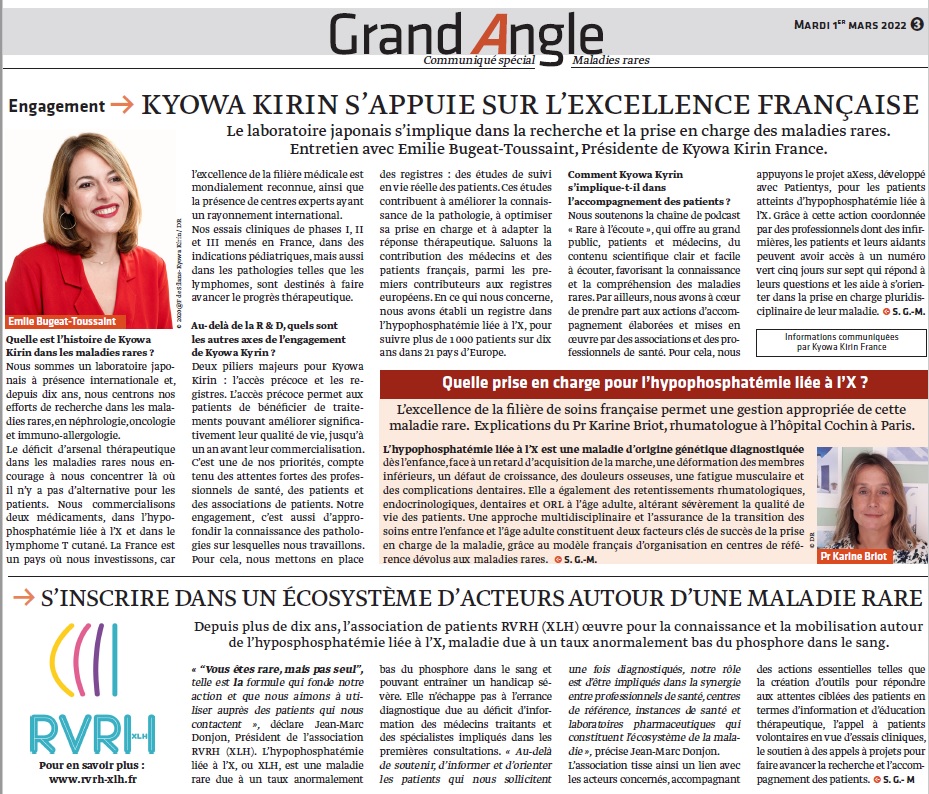 Image: The article extracted from the Grand Angle rare diseases Dossier, produced by CommEdition, published in Le Monde on February 28, 2022

The company has also used the media to promote awareness and understanding of rare diseases. The Central Cluster (France, Belgium, the Netherlands and Luxembourg) published an advertorial about RDD in the national edition of the French newspaper Le Monde. Kyowa Kirin France president Emilie Bugeat-Toussaint was interviewed for the piece and explained the company’s initiatives.

Providing insight on rare diseases via the news

Video: The news program “Shining a Light on Rare Conditions”

In another media-based initiative for the entire company, Kyowa Kirin International president Abdul Mullik and executive vice president Danie du Plessis appeared on the online news program “Shining a Light on Rare Conditions” produced by Genetic Alliance UK, which is formed of over 200 organizations for patients with genetic diseases. On the program they spoke about the challenges faced by people with rare diseases and explained how the company is striving to improve their lives.

Seeing the value in being unique

Kyowa Kirin International has used the power of art and the media to help boost understanding of rare diseases both in and outside of the company. It would be wonderful to see more creative and engaging initiatives focused on the idea of uniqueness to support the rare disease community.

The activities mentioned in the article were conducted in the EMEA Region under the relevant laws and regulations of each country.