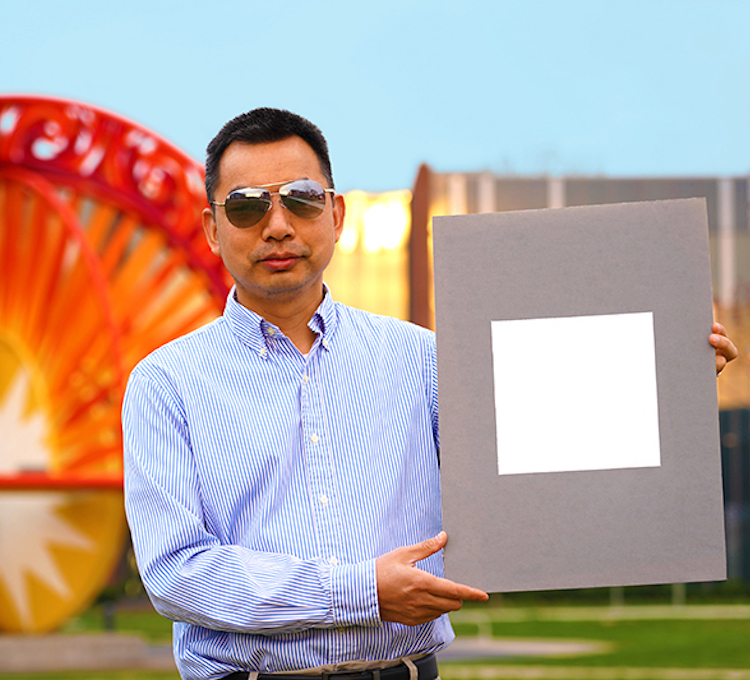 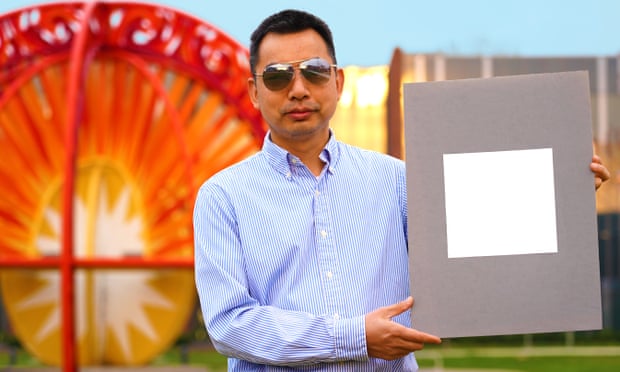 Prof Xiulin Ruan, a professor of mechanical engineering, with a sample of the paint. Photograph: Jared Pike/Purdue University

The whitest-ever paint has been produced by academic researchers, with the aim of boosting the cooling of buildings and tackling the climate crisis.

The new paint reflects 98% of sunlight as well as radiating infrared heat through the atmosphere into space. In tests, it cooled surfaces by 4.5C below the ambient temperature, even in strong sunlight. The researchers said the paint could be on the market in one or two years.

White-painted roofs have been used to cool buildings for centuries. As global heating pushes temperatures up, the technique is also being used on modern city buildings, such as in Ahmedabad in India and New York City in the US.

Currently available reflective white paints are far better than dark roofing materials, but only reflect 80-90% of sunlight and absorb UV light. This means they cannot cool surfaces below ambient temperatures. The new paint does this, leading to less need for air conditioning and the carbon emissions they produce, which are rising rapidly.

“Our paint can help fight against global warming by helping to cool the Earth – that’s the cool point,” said Prof Xiulin Ruan at Purdue University in the US. “Producing the whitest white means the paint can reflect the maximum amount of sunlight back to space.” 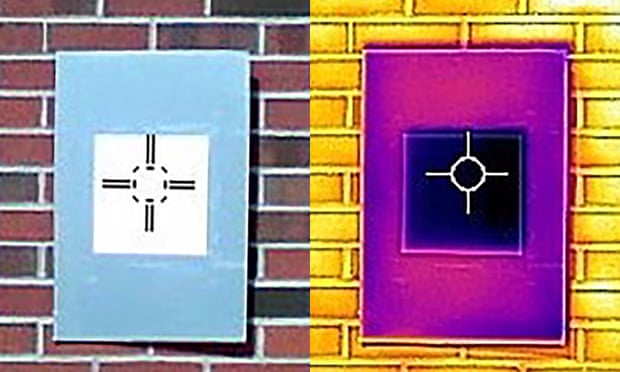 An infrared image shows how a sample of the ‘whitest paint’ (the dark purple square in the middle) cools the board below ambient temperature. Photograph: Joseph Peoples/Purdue University

Ruan said painting a roof of 93 sq metres (1,000 sq ft) would give a cooling power of 10 kilowatts: “That’s more powerful than the central air conditioners used by most houses.”

The new paint was revealed in a report in the journal ACS Applied Materials & Interfaces. Three factors are responsible for the paint’s cooling performance. First, barium sulphate was used as the pigment which, unlike conventional titanium dioxide pigment, does not absorb UV light. Second, a high concentration of pigment was used – 60%.

Third, the pigment particles were of varied size. The amount of light scattered by a particle depends on its size, so using a range scatters more of the light spectrum from the sun. Ruan’s lab had assessed more than 100 different materials and tested about 50 formulations for each of the most promising. Their previous whitest paint used calcium carbonate – chalk – and reflected 95.5% sunlight.

The barium sulphate paint enables surfaces to be below the ambient air temperature, even in direct sunlight, because it reflects so much of the sun’s light and also radiates infrared heat at a wavelength that is not absorbed by air. “The radiation can go through the atmosphere, being directly lost to deep space, which is extremely cold,” said Ruan.

The researchers said the ultra-white paint uses a standard acrylic solvent and could be manufactured like conventional paint. They claim the paint would be similar in price to current paints, with barium sulphate actually cheaper than titanium dioxide. They have also tested the paint’s resistance to abrasion, but said longer-term weathering tests were needed to assess its long-term durability.

Ruan said the paint was not a risk to people’s eyesight: “Our surface reflects the sunlight diffusely, so the power going in any particular direction is not very strong. It just looks bright white, a bit whiter than snow.”

A patent for the paint has been filed jointly by the university and research team, which is now working with a large corporation towards commercialisation: “We think this paint will be made widely available to the market, in one or two years, I hope, if we do it quickly.”

Lukas Schertel, a light-scattering expert at the University of Cambridge, UK, who was not part of the research team, said: “Using paint for cooling is not new but has still a high potential to improve our society, as it is widely used. This study makes a step towards commercially relevant solutions. If further improved, I am convinced such technology can play a role in reducing carbon emissions and having a global impact.”

Schertel said the high concentration of pigment in the paint and the relatively thick layers used raised questions of cost: “Pigment is the main cost in paint.” Ruan said his team hoped to optimise the paint so it can be used in thinner layers, perhaps by using new materials, so it will be easier to apply and lower cost.

Andrew Parnell, who works on sustainable coatings at the University of Sheffield, UK, said: “The principle is very exciting and the science [in the new study] is good. But I think there might be logistical problems that are not trivial. How many million tonnes [of barium sulphate] would you need?”

Parnell said a comparison of the carbon dioxide emitted by the mining of barium sulphate with the emissions saved from lower air conditioning use would be needed to fully assess the new paint. He also said green roofs, on which plants grow, could be more sustainable where practical.

Project Drawdown, a charity that assesses climate solutions, estimates that white roofs and green roofs could avoid between 600m and 1.1bn tonnes of carbon dioxide by 2050, roughly equivalent to two to three years of the UK’s total annual emissions.

This article was written by Damian Carrington Environment editor from The Guardian and was legally licensed through the Industry Dive publisher network. Please direct all licensing questions to legal@industrydive.com.

Which is safer for the environment, paper or plastic bags?