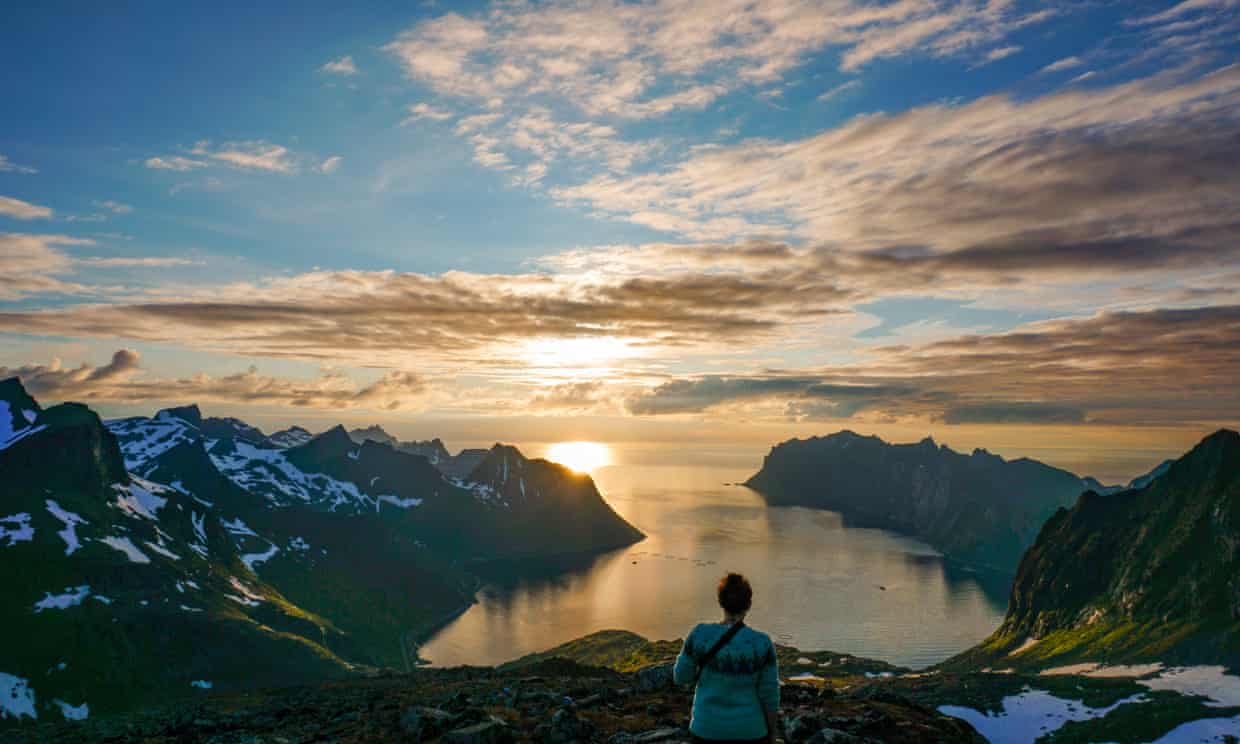 First things first, let’s tackle the pronunciation. “It’s free-luftz-leev,” says Lasse Heimdal, repeating the word four times on the phone from a relatively balmy Oslo (14C, sunny) until I get it right.

Heimdal is the general secretary of the Norwegian Association for Outdoor Organisations, otherwise known as Norsk Friluftsliv. It is a large, voluntary organisation that promotes friluftsliv – or “free-air life” – in the country and, it seems, beyond.

While I find it difficult to pronounce, friluftsliv is easy to define and in turn assimilate – assuming you have an all-weather jacket, some decent socks and perhaps a car. “For Norwegians, friluftsliv is less about what you do and more about where you are,” he says, pointing – I imagine – to the crystal-clear fjords and pines of his hometown’s outskirts. “For me, it is about disconnecting from daily stress, being part of the cultural ‘we’ and existing in what I call nature – an ‘escape room’” as if the woods were an extension of his own home. Heimdal partakes in friluftsliv up to three times a week.

Instructive rather than conceptual, typical friluftsliv activities include relaxing, fishing, hiking, sleeping in “camping hammocks” (not tents) and picking cloudberries. Its symbol is the campfire and its mantra is “man’s right to roam”. In many ways, I say, friluftsliv sounds a lot like Love Island. Heimdal is not familiar with Love Island. 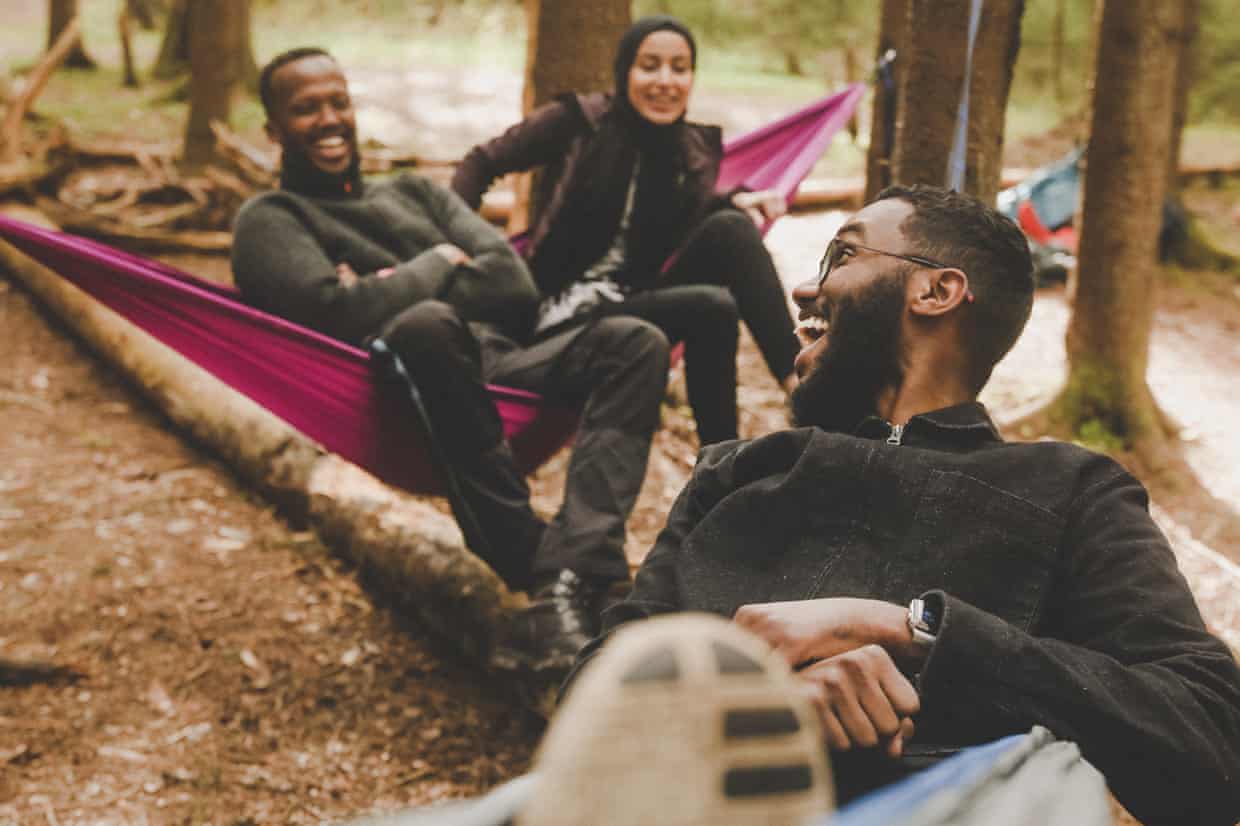 Camping hammocks, one of the trademarks of friluftsliv. Photograph: Eivind Haugstad Kleiven

Looking out the window of my flat as a couple fight on the street about childcare, I can see why the idea of “open-air living” drums up almost a million hashtags on Instagram, warranted a profile in National Geographic magazine and appears, according to Heimdal, on two out of every three online dating profiles in Norway. Given the change in weather, I can also see why it is set to overhaul hygge as our Scandinavian word du jour given how much time we’ve spent indoors since March.

Unsurprisingly, friluftsliv has been the runaway hit of what Heimdal refers to as “corona season”; he says one in three Norwegians increased their outdoor time since March – quite a feat given that the average Norwegian visits the great outdoors at least three times a week. Such was the demand for outdoor kit that, after many Norwegian shops shut in March, the government had to recall furloughed staff at camping and sports retailers and even hire extra workers.

While early lockdown measures succeeded in keeping Norway’s number of coronavirus cases relatively low, there has been a recent increase in cases. Fortunately, it is easy to maintain social distancing while camping. As yet, says Heimdal, there have been no recorded cases of the virus being transmitted during a friluftsliv-based excursion. “We try not to think too much about this corona stuff,” he says of his fellow friluftsliv-lovers.

The pull of friluftsliv has been at the heart of Norwegian culture for decades. Henrik Ibsen’s poem On the Heights, thought to contain the first mention of the term, follows the dilemma of a young farmer torn between life on the farm and something more, well, friluftsliv. The 2019 Norwegian TV thriller Twin features two brothers, one of whom is more friluftsliv than the other – with devastating effect.

We have been here before, of course. Look behind a cultural fad these days and you will likely find a Scandinavian, selling candles (hygge) or harping on about work-life balance (lagom). As Dr Jakob Stougaard-Nielsen, a Danish lecturer at University College London, told me during peak-hygge in 2017, Norwegians love metonymy, or substituting a word for a concept. “In Britain, it is harder to agree on one word to cover particular sensibilities across social, geographic and cultural differences”. He also told me that Scandinavians have a knack for “self-mythologising” which may explain their reach. Still while hygge and lagom remain nebulous as terms yet marketable as products, friluftsliv is almost too broad to commodify.

In Norway, they have government-sponsored ‘libraries’ for borrowing hiking gear

It is precisely the tension between city and nature that makes the concept of friluftsliv all the more relevant; as we head into a second lockdown just six months after the first one was imposed, the pull of the outdoors has never been stronger. It is particularly desirable given that the concept is wholly experiential, and free; the experience economy, beloved by millennials, plummeted into recession when we stopped going out in March.

I ask Tom Rønning, an Oslo resident who works in IT, if one can be friluftsliv. No, he says, but you can be a friluftsliv sort of person. It is about the safety of nature, the end of doomscrolling and the invaluable lesson of brutal Scandinavian winters (there is no such thing as bad weather, only unsuitable clothes). As for the clothes, “gorpcore” – that confection of style, Patagonia and chunky hiking socks – probably needed a new outlet. This one is more sustainable: in Norway, Heimdal tells me, they have government-sponsored “libraries” for borrowing hiking gear.

It is easy to view friluftsliv as an activity of the prosperous and bourgeois, particularly if you are sitting in a garden-less flat miles from any green space. Also, a cabin is simply a second home – and we know how we feel about those (the Norwegian government banned the use of them during the more serious parts of lockdown). Then there is the knottier business of Norway being a country that shouts loudly about environmentalism while also making a lot of money from oil.

Heimdal, however, is more interested in friluftsliv’s role in Norway’s mental health. “It is [warm] now but in a few weeks, it will be below zero. We have very challenging weather, so we have a lifestyle that suits that and this is part of it. But you have to remember that depression is a problem here,” he says of the country’s famously dark winters. “This is why in school we teach our kids how to dress for the cold, so we can start looking at the problem early.” It is a reason why Heimdal thinks we should move our offices outside.

Still, friluftsliv is not for everyone. Rønning lives 100 metres from the woods and often sees deer and moose outside his house, yet he “can probably count on one hand how many times I have been in a cabin in my adult life”.

This article was written by Morwenna Ferrier from The Guardian and was legally licensed through the Industry Dive publisher network. Please direct all licensing questions to legal@industrydive.com.

Trees bulldozed to make way for refugee shelters in Sudan