It was during a phone conversation with her sister back in Qatar that the idea clicked for Hollywood animation artist Reem Ali Adeeb.

Like other regions across the world, young children in the Middle East were confined at home because of the COVID-19 pandemic, but there was not nearly enough original content online in Arabic to keep them entertained, such as fun tutorials and other activities.

So Ali Adeeb, a Syrian-born animation artist who works at Warner Bros. Entertainment in Los Angeles, and her sister Sandi, a university lecturer of pharmaceutics in Qatar, decided to take matters into their own hands.

The pair set up “Susupreemo,” a YouTube channel designed to help Arabic-speaking kids — and their stressed-out parents — weather the coronavirus lockdowns through basic tutorials on drawing, making origami or simply reading children’s books, all in Arabic.

“The idea is to create videos to engage the kids,” said Ali Adeeb, who at Warner Bros. has worked on children’s shows including “Green Eggs and Ham,” a Netflix animated series based on the Dr. Seuss classic. 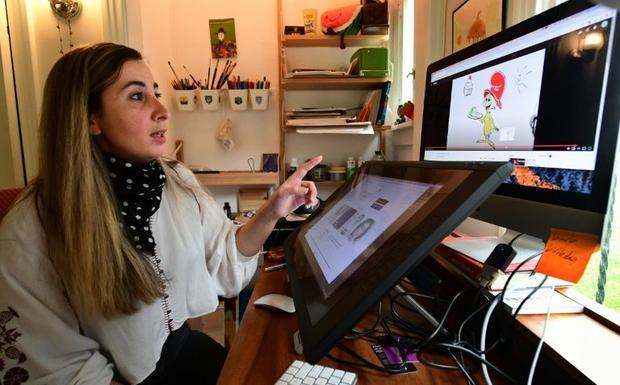 Artist Reem Ali Adeeb gestures while pointing out the Netflix production of “Green Eggs and Ham” on which she worked, in her studio apartment in Los Angeles, California on April 29, 2020
Frederic J. BROWN, AFP

“There’s tons of content on the web in English for kids but there is not enough original content in Arabic,” added the 34-year-old who is now working from home on the second season of the Netflix show. “So the aim is to make their screen time interactive and inspiring by drawing with them, reading them a story or doing crafts.”

Ali Adeeb said her sister’s 7-year-old son Omar has even joined in the fun, offering origami tutorials to his peers.

“He’s been the best. He’s done the most among us with three videos recorded already,” she said.

Ali Adeeb herself is using some of the characters from “Green Eggs and Ham,” notably Chickeraffe, a chicken/giraffe hybrid, to draw young viewers into her world.

Sandi for her part keeps her young audience focused and allows their imagination to travel by reading them children’s books.

“I thought I would read for kids during a time where buying or lending a book is very challenging, especially for some disadvantaged kids in some Arab countries,” she told AFP in an email.

“I started with a book suitable for children aged 3 to 6 years old and now I am selecting more books that can engage the kids for longer periods,” she added.

The response, so far, has been overwhelmingly positive with children enthusiastically sharing their drawings via email and parents thankful for the opportunity to be able to hold work meetings online without being interrupted or just have some time for themselves.

In a region often wracked by war, and where children faced a harsh reality even before the pandemic, experts say such tutorials offer kids a reprieve whether in the comfort of their homes or even in refugee camps.

“Nowadays, children worldwide are confined in their homes and children in the Middle East are no exception,” said Annamaria Laurini, the former head of UNICEF in Lebanon. 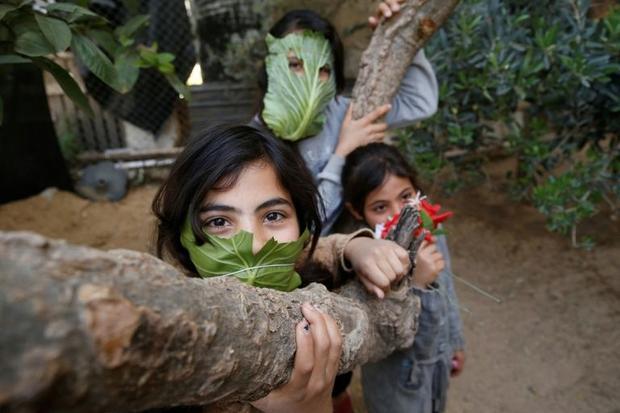 Palestinian children pose with makeshifts masks made of cabbage while cooking at home with their family in Beit Lahia in the northern Gaza Strip on April 16, 2020 amid the coronavirus COVID-19 pandemic.
MOHAMMED ABED, AFP/File

“Suddenly their own world has disappeared — no more school, no more play with their friends and no more human interactions except with their family,” she added. “It’s a lonely reality that makes it difficult to dream, that confines their imagination to the walls of their room — if they are so lucky to have one.”

Soha Bsat Boustani, a UNICEF consultant based in Beirut, said the YouTube tutorials are much needed in a region where such material in Arabic for children is lagging in terms of creativity and innovation.

“And so, initiatives like ‘Susupreemo’ can only be seen in a positive light as it gives children a healthy way out of confinement and a sense of normalcy.”

So far Ali Adeeb, her sister and nephew have produced seven videos and they hope to continue with their project even after the pandemic.

“I’m thinking now of teaching kids how to draw popular cartoon characters … and I’m hoping to open this space for other artists,” she said. “I have a friend who is a dancer and I would love for her to teach kids how to dance.