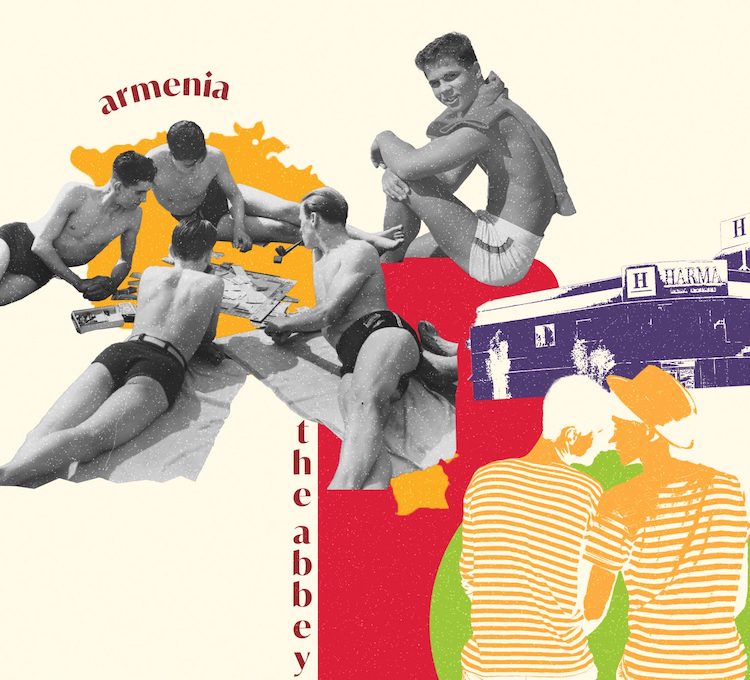 Growing up in Armenia, Harma Hartouni didn’t feel safe being gay. In fact, at first, he thought he was sick. When I grew up in Armenia, attraction to similar-gender people was nothing but a sickness. I didn’t know there were words to even describe this kind of attraction nor that they would become a pillar in my (or anyone else’s) identity. I was so concerned by my own feelings as a teen that I sought the care of endocrinologists, begging hormone experts to make me more manly, and less, well, me. It didn’t work. And thank goodness for that because now, 20 years later, I’m married to the love of my life, am the father of a son and twin daughters, run a thriving real estate business, and have become an author. Still, the road to get here was bumpy.

The first time I realized I was attracted to boys was during a family vacation – one with a pool. There were men swimming, tanning, and shooting hoops everywhere. I couldn’t stop staring at them no matter how hard I tried. I felt innately drawn to them, intrigued by their bodies, and drawn to their builds. It made me sick to my stomach. I thought I was sick.

To avoid sitting with the truth of who I am, I switched schools every single year of middle and high school. Then when I was 19 years old, my body was brutalized in a car wreck. A driver hit my car from behind, and when I stepped out of the vehicle, I was hit by another passing car, breaking nearly every bone in both my legs. I convinced my parents to let me go to California for treatment. After I recovered, I knew I couldn’t leave the U.S. It would be safer to explore my sexuality from here. So I never returned to Armenia.

One night, I ended up at a gay bar called The Abbey and remember feeling nothing but shock. I was shocked by what people were wearing. I was shocked people were being so public with their affection. I was shocked by the idea of being proud of being gay. On top of that, I didn’t speak enough English at the time to carry on a full conversation with anyone at the bar. So I stood in the corner judging and fearing everyone.

At first, I was terrified to go back to that bar for fear of making my “illness” worse, but I did return eventually. And wow – everyone was so nice and welcoming. I even found a group of gay men who also spoke Armenian and similar languages so we could more easily communicate.

The more I frequented The Abbey and connected with other gay men, the more it began to feel like I was living a double life. There was my home life where I was Armenian and sick, and there was my nightlife where I was gay. Finally, at the age of 21, I came out to my mom.

If you’re reading this and are currently in the closet, I don’t want to deter you from sharing your truth, but it was a disaster. Having learned my truth, my mom tried (but luckily, failed) to commit suicide, and later tried to send me to conversion therapy. Our relationship remained incredibly rocky for the next five years.

Meeting My Husband & Starting a Family

I met Asad, my now-husband, shortly after coming out to my mom. At the time, I wasn’t looking for a relationship. But as an Iranian man, Asad understood me culturally more than anyone else I’d met before, and he felt safe. Immediately, he became my best friend and lover.

On our second date, we went to Home Depot for furniture building supplies, on our 47th day of dating we moved in together, and after three months of dating, we got a shared bank account. Finally, after five years together, we decided to get married and have kids.

Interestingly enough, telling my mom that we were planning to have kids changed everything about our mother-son relationship. I think it helped her understand that she could still become a grandmother and experience that next chapter in life regardless of who my partner was. These days, our relationship is healed, and she celebrates our family unit.

Asad and I decided to have kids in 2013 with the help of a surrogate because, at the time, we had friends in the LGBTQ+ community who had a lot of trouble with the adoption process.

In April 2014 our son was born. Three short months later our surrogate told us she was ready to be pregnant again, and in July 2015 our twin daughters were born. (Hiring a surrogate is hugely expensive, and Asad and I feel grateful every day that our careers gave us the financial freedom to afford it.)

Our kids have always been surrounded by modern families including those with two moms, two dads, and mixed-gender parents. So they understand that having two dads is normal. Still, my son is now 7 and the twins are 6, and they’re beginning to ask questions about what words such as “pride,” “gay,” and “straight” mean.

After explaining to my son what it meant to be gay, for example, he simply said “okay,” and went back to playing on the iPad because this information was no big deal to him. As they get older, I’m sure more questions like this continue to pop up. And we’ll continue to answer them because we have nothing to hide. We have nothing but pride.

If you had told me 20 years ago that I would be with a man, have a family, and live the life of pleasure, prosperity, and love that I’m currently living, I never would have believed you.

For anyone reading this who can relate to where I was two decades ago – in denial, afraid, self-loathing, or scornful – I want you to know that your journey is not over. Your life is going to be more beautiful than you can imagine. Continue to express yourself authentically, share your love with those who deserve it, and trust that you will find your way. Soon enough, like me, you’ll find yourself not just surviving but also thriving as a proud member of the LGBTQ community.

To learn more about Harma Hartouni check out his recently released memoir, Getting Back Up: A Story of Resilience, Self-Acceptance & Success.

This article was written by Gabrielle Kassel from Shape and was legally licensed through the Industry Dive publisher network. Please direct all licensing questions to legal@industrydive.com.